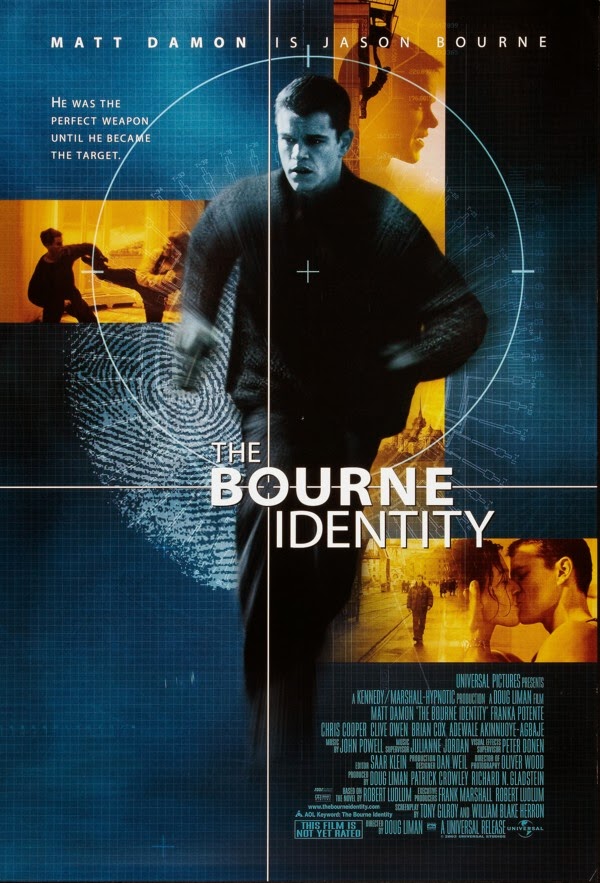 I recently completed my first viewing of all the Bourne films, and I have to say that the trilogy (not counting Legacy) is quite possibly one of my favourite trilogies of movies ever. Certainly in the Top 5, with the likes of the original Star Wars films, Christopher Nolan’s Batman series, Back to the Future and the Lord of the Rings movies in there as well. Everything about this series is just so good, and The Bourne Identity serves as a fascinating introduction to the world of Jason Bourne.

We open on a boat in the middle of the ocean. A man is hauled overboard, not remembering anything. He doesn’t know his name or what his job is, but he does know how to use a gun, how to survive and how to speak several languages. Things get more interesting when he enters a bank and finds multiple passports in his name, “Jason Bourne”, a load of money and a gun. In the quest to find out who he is, Jason (Matt Damon) enlists the aid of Marie Helena Krutz (Franka Potente), a German woman who he offers $20,000 to drive him to an address in Paris. However, he’s hunted by the authorities, and as he reaches Paris, the net is quickly closing in.

The action scenes in this film are gritty and realistic. Whilst there isn’t as many over the top sequences as the Bond movies, there are a few moments of questionable reality. And Yes, Bourne may have the same first two initials as Bond (something that’s explained, IIRC not in this film but in Ultimatum, the third movie) but in my view, Bourne is better. It’s more thrilling. You don’t quite know what’s going to happen next and anybody apart from Jason himself is fair game. The tension is high throughout, and that’s the way that thriller movies should be.

Matt Damon plays Bourne very well, and this is in part why Legacy – the latest Bourne movie suffered. Jeremy Renner simply isn’t Matt Damon, and that’s why The Bourne Identity rocked. He plays Bourne very well and to make things even more interesting, Franka Potente makes a good addition as Maria Helena Krutz. The chemistry between the two is good and their actions are believable for characters in this situation.

The plot is well paced and develops incredibly well. Not everything is answered but the movie stands well enough on its own to watch without having to see the sequels. (However, trust me – you will want to watch at least Supremacy and Ultimatum after watching this film). Whilst it may not be the most original movie ever, The Bourne Identity does do something that’s rare among big summer action movies – it’s smart, and not stupid. Doug Liman’s hand held camera style makes things interesting and he’s quickly establishing himself as a good director in my book, with the more recent Edge of Tomorrow being another good addition by him.

In conclusion then, The Bourne Identity is essential viewing for any action thriller fans. It took me longer than expected to get around to the series but I’m really glad I gave it a chance, because this film and this series is exceptional.  And it’s something that you should check out, too.