I review The Maze Runner, the latest adaption of a popular young adult dystopian series, based of James Dashner’s novels and directed by Wes Ball. It stars Dylan O’Brien, Kaya Scodelario, Will Poulter, Thomas Brodie-Sangster and more. 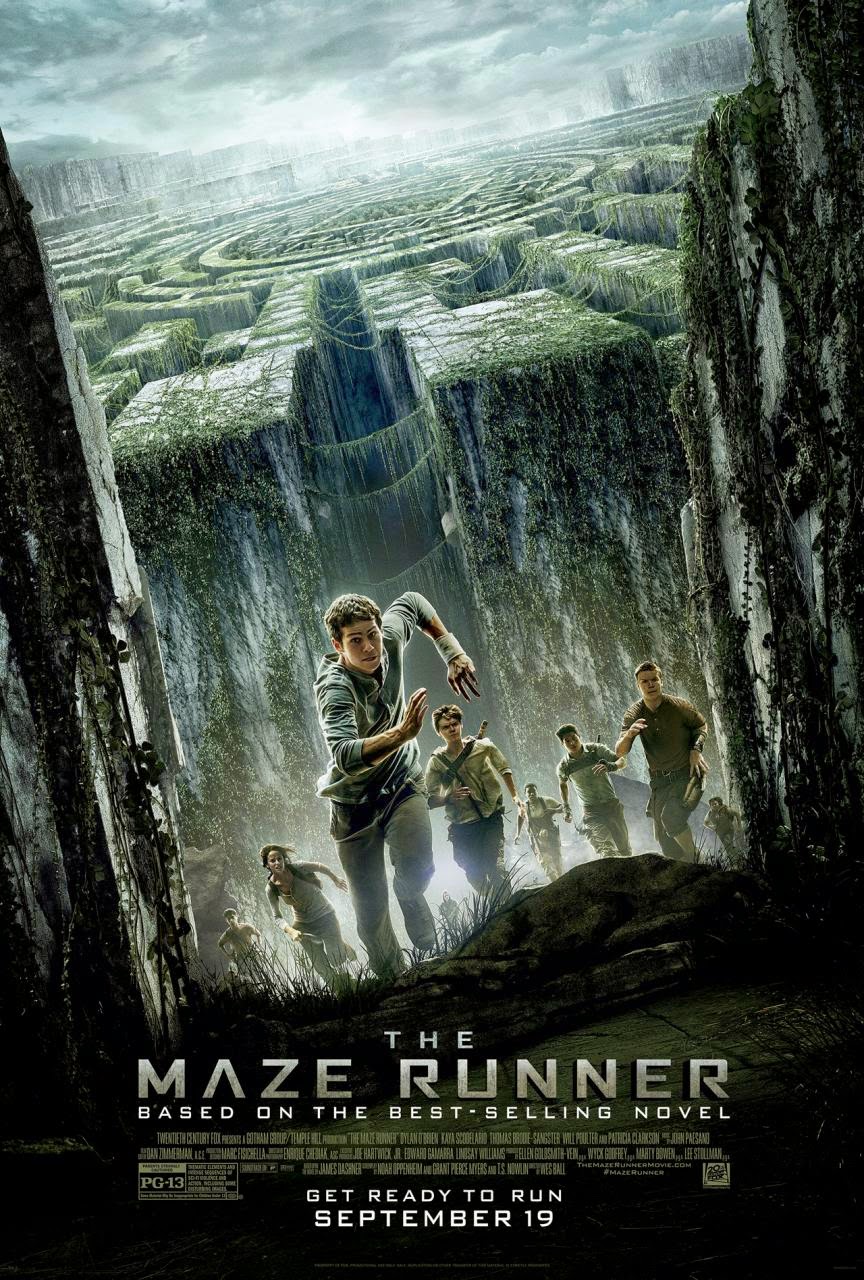 Wes Ball's latest movie, The Maze Runner, introduces us to an interesting (but yet another) new dystopian world, and starring the likes of Dylan O'Brien, Kaya Scodelario, Thomas Brodie-Sangster and Will Poulter, and whilst it may suffer from one or two problems, it does not disappoint.

The film opens with a lift ascending, carrying a young boy who cannot remember anything about himself. Where he came from, who his parents were and why he is here. He can’t even remember his own name. When the lift reaches the top, he finds himself surrounded by a group of boys who have been through exactly the same situation as he’s been through, only as they’ve spent longer in their new surroundings, they can remember their names. It doesn’t take long for the boy to remember his own name, Thomas, but why he’s here remains a mystery. The enclosure that the boys live in is surrounded by a giant maze, with no escape other than through it. However, the gigantic doors close at nightfall, and if you are trapped inside, then you’ll never make it out in one piece.

It’s a harsh new reality where Thomas finds himself in, and as he struggles to remember his identity, a newcomer comes up the lift. For the first time, it’s a girl, named Teresa. And she comes with a note attached, claiming that she’s the last one. Ever.

The Maze Runner is the third notable adaption of a young adult dystopian novel series this year, following in the wake of the likes of Divergent & The Giver, with all these movies designed to appeal to the fans who loved The Hunger Games. Whilst I’m yet to see The Giver, Divergent was largely a disappointment. So was The Mortal Instruments: City of Bones, which was released at the end of last year, with neither quite living up to the high bar set by the adaption of Suzanne Collins’ novels. Well, I’m pleased to say that with The Maze Runner, it looks like we might have found a contender, and whilst it doesn’t quite contend with Guardians of the Galaxy for the best movie of the year, you could do with a lot worse.

There’s several things that feel fresh about The Maze Runner despite the fact that yes, it is another dystopia. The cast is actually surprisingly good, with Dylan O’Brien carrying the lead role very well indeed. There’s also Thomas Brodie-Sangster (who fans will recgonise from Game of Thrones and a brief role in The Human Nature/Family of Blood episodes of Doctor Who) as Newt, and a whole bunch of other actors that work well. Kaya Scodelario plays Teresa, is the only prominent teenage female character in the film, but she puts in a good performance even if she isn’t given as much material to work with as Dylan O’Brien. Refreshingly, there’s no love triangle or even romance at all, and whilst I’m unsure as to whether there’s any in the next two books or not (I’ve only read the first adaption) it comes as a welcome change to the likes of the young adult movies that have been hitting cinemas lately.

The Maze itself is a visual treat, and it looks stunning on the big screen, its indomitable presence feeling very much like a character in its own right. Its complex layout and hostile creations that lurk inside (called Grievers) make it stand out well and provide a great challenge for the characters to overcome. It also manages to keep the film unpredictable, and unlike many young adult adaptions, if you haven’t read the book you won’t be able to tell what’s coming next.

And speaking of unpredictability, the ending is something else. Whilst yes, it does end on a cliffhanger (don’t worry though, there has been a sequel confirmed) the cliffhanger actually works, with a really strong ending. You won’t see it coming and whilst I won’t spoil it here, the less you know going in the more you’ll be surprised. There’s loads of potential here for a completely different sequel, with several different directions that the series could go in from here.

However, The Maze Runner isn’t perfect. Unlike the novel, they don’t address why the boys can’t just climb over the top of the maze very well (IIRC, the novel mentions that you would be killed on the top whilst the fact that the vines don’t go all the way up isn’t a good enough explanation) and there is a large amount of dull but necessary exposition early on as Thomas awakens in the maze, and whilst the acting is mostly good the film itself doesn’t really leave a lasting impression serving as nothing more than a fun, enjoyable action flick.

That said, The Maze Runner looks good. Newcomer director Wes Bell makes it look stylish and the effects are handled well, with some good balance between the character development and action sequences, which are also quite good. Hopefully Bell will be sticking around for the sequels, because I’m interested to see where it goes from here and how the story progresses.

In conclusion then, The Maze Runner is a fun, enjoyable movie that will have you on the edge of your seats. You could do far worse than this whether you watch it at the cinema or wait until DVD. Yes, it may not be perfect, but Hunger Games aside, this is probably one of the better young adult novel adaptions currently released, not just in the dystopian genre.