I review Batman: Arkham Origins, the latest game in the Arkham series, exploring the early years of Batman and developed by Warner Bros. Games, released on the PC, Xbox 360 and PS3. 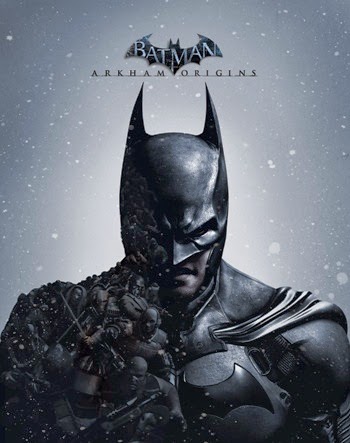 Batman: Arkham Origins is most likely the final Arkham game to be released on consoles for the Xbox 360/PS3 with the upcoming Arkham Knight being a next-gen exclusive. This game really faced an uphill battle from the start - it wasn't developed for example by fan favourites Rocksteady, who were responsible for the smash hits of Arkham Asylum and Arkham City, which are generally viewed as the best superhero games to date. Arkham Asylum served as a nice third person action game restricted to the corridors Arkham Asylum, pitting an already established Dark Knight against a variety of villains such as Killer Croc and the Joker. The successor saw Batman go up against Clayface, the League of Assassins, Hugo Strange and the Joker in a City full of criminals, and upped the ante even further beyond the already fantastic Arkham Asylum. So when Arkham Origins came around and it was not only not going to be developed by Rocksteady, but also lacked the fan-favourite  talents of Mark Hamill and Kevin Conroy, who voiced the Joker and Batman respectively. Instead, the weight fell upon the shoulders of Troy Baker and Roger Craig Smith.

The game opens with a jailbreak at Blackgate Prison, led by Black Mask. Left to battle Killer Croc, Batman finds himself the target of eight deadly assassins, the likes of Firefly, Bane, Killer Croc, Lady Shiva, Executioner, Deathstroke, Copperhead and Deadshot sent to capture him following a $50million bounty placed on his head. He not only has to deal with a new problem concerning a relatively unknown criminal known as the Joker, but also a corrupt GCPD where its SWAT team are more focused on gunning for him rather than the criminals, and a James Gordon who is determined to arrest the Dark Knight.

Right from the get go, Arkham Origins is an action packed blockbuster of a game. The main storyline is one of the biggest yet, but it often feels bogged down by a sense of repetitiveness, and there are places where the map, spanning the entirety of Gotham City, feels too large, particularly in the early sections of the game, where the player is forced to navigate across the entirety of the map without the means of fast travel, which has been shut down by a master criminal known as Enigma. Once the map is fully available to fast travel it becomes easier to navigate, but there are times when it just becomes a distraction.

There is no forward movement in the game here and that is in part due to Warner Bro's decision to replicate the success of Arkham City rather than improve it. It just feels like the previous game but on a larger scale, with no serious advancements in terms of mechanics. There are pretty much no new tutorials to be learned here, especially if you're familiar with the previous games. However, for fans of the comic and those annoyed by the grounded world of the Christopher Nolan movies prevented villains like Killer Croc making their apperance, Arkham Origins is the game for you. There are more of Batman's Rogues Gallery than ever before. Whilst we don't exactly get to witness the origin of Batman - it takes place after he dons the suit, the game seems to revel in the comic book element and this is something that will please fans - with lots of teasers dropped - there's even references as wide as the Court of Owls and Zatanna, even if they don't show up in person.

The gameplay still manages to be fun and entertaining even if there's nothing new. The novelty of playing Batman never gets old and the mechanics are so much fun to watch it's incredibly entertaining, even if the boss fights do start to get repetitive after a while (particularly when you have to fight Bane twice), the stealth combat is always fun and whilst you'll have fun smashing the enemy to pieces in open combat, like the Assassin's Creed series, you'll get a lot more enjoyment out of completing the various missions without alerting the enemy at all, even if this makes it harder to accomplish.

The storyline is another element that's fun and enjoyable. There are moments of great gameplay here with the Deathstroke fight relatively early on being pulled off incredibly well - and the short but brief fight with the Electrocutioner adds an amusing touch to a game that otherwise takes itself incredibly seriously.

Voice acting wise, newcomers Troy Baker and Roger Craig Smith had a lot to do to live up to the expectations of previous voice actors, and they succeeded. Roger Craig Smith delivers a good Batman but it's Troy Baker who really steals the show - his Joker is one of the highlights and if you go in without having heard it beforehand you'll be surprised as to just how good it is.

As usual in these reviews, there'll be no comment on the multiplayer because I lack Xbox Live, but from what I've experienced, Arkham Origins is a fun and entertaining game that does tend to feel repetitive after a while. It's the weakest of the Batman games yet, but the fact that it manages to get a high score is saying that it's still a very good game that comes recommended.