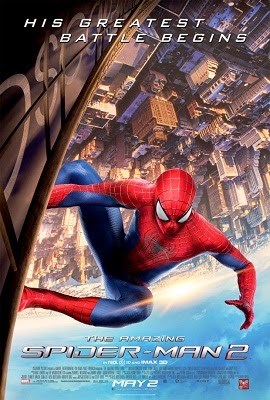 The Amazing Spider-Man was the dark horse of superhero movies in a year that included Avengers Assemble and the final act of Christopher Nolan's Dark Knight Trilogy, The Dark Knight Rises. Especially when it was essentially a retelling of an origin story that had already been told several times before, including in a recent movie series which wrapped up with the third act. However, thanks to the good cast of Andrew Garfield as Spider-Man and Emma Stone as love interest Gwen Stacey, as well as a good narrative, The Amazing Spider-Man proved to be a big hit that the sequel was made and there are plans to release Amazing Spider-Man-related movies each year, with the likes of Sinister Six in the works. So it was another make or break task for The Amazing Spider-Man 2 - could it reach the quality of the original, and tell a good, compelling storyline?

The answer is yes. Whilst some may argue that there are too many villains - with origins for Electro (Jamie Foxx), the Green Goblin, Harry Osborne (Dane Dehaan),The Rhino (Paul Giamatti) and more provided in the movie alone, it manages to mostly handle them well even if some characters get bigger storylines than others. And yes, at times this movie, particularly in the final act, feels like it's setting up for greater things to come. However, despite this, there are several good moments. For example, following a flashback sequence detailing the final moments of Peter's parents, we open to a fun, action packed chase through the streets of Daytime New York City that prove Andrew Garfield has nailed the character of Spider-Man quicker than Tobey McGuire ever did, injecting more life into the character than McGuire did in the whole trilogy.  It's more light-hearted and fun than the previous movie was, too - at least in its opening act, before it quickly takes a darker turn.

The Amazing Spider-Man 2 balances several tones. One moment it's a rom-com, the next, an unabashed, over the top superhero movie and the next it's a grim, gritty take on the Spider-Man story. These themes are tied together well, for the most part, but too much time is spend building up to the final act, rendering the first half of the movie following the opening moments relatively weak - which is a shame because it started off so well. It also means that the pace is off as well, and there are moments that are a lot more exciting than others.

The chemistry between Emma Stone and Andrew Garfield was evident in the first movie and it continues here. It doesn't feel forced or out of place, instead feeling natural and unique. We also get a good few scenes between him and Harry Osborne, before the latter becomes the Green Goblin - as both Peter and Harry have a shared past. We also get some brief moments with Jamie Foxx's Max Dillon, before he turns into Electro, and the two main villains are handled relatively well, with Rhino being more of a cameo than having an actual main role in storyline.

Fans of superhero sequels will be no stranger to what this one has to offer, with higher stakes, complex character interplay and better effects on display and whilst Amazing Spider-Man 2 may not be the most original superhero film ever, it is certainly one of the more entertaining ones.

The Amazing Spider-Man 2 therefore, is one of the better adaptions of Marvel material. Whilst not quite as good as the first, falling short of the Top 5 (Captain America: The Winter Soldier, Avengers Assemble, X2, X Men: First Class and The Amazing Spider-Man), it's most certainly in the upper sections of the Top 10. It also comes highly recommended, and is well worth your time.