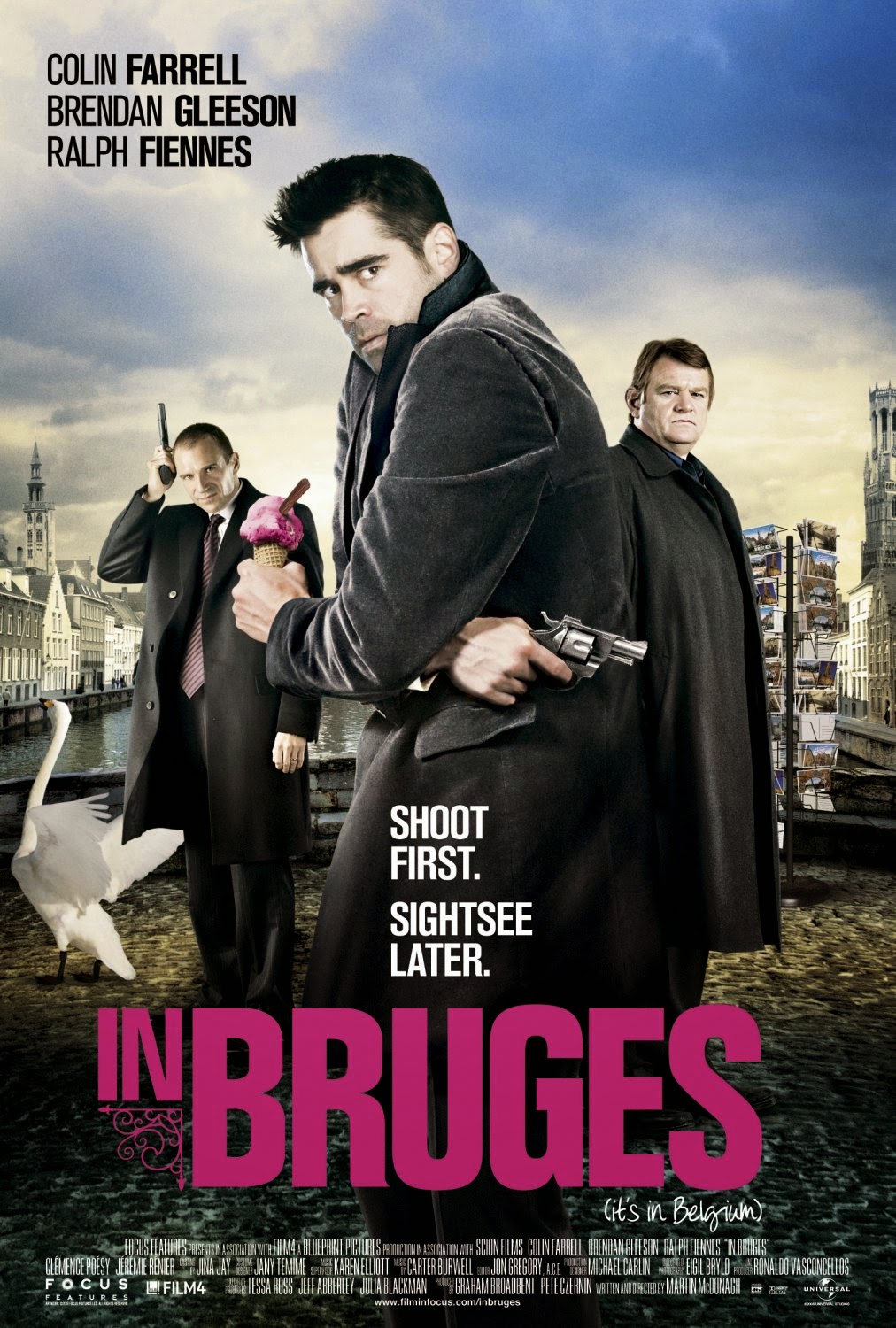 In Bruges is a film that I haven’t heard that much about and didn’t really know what to expect going in, with little exposure to the actors involved outside of Brendan Gleeson (Mad-Eye Moody), Ralph Fiennes (Lord Voldermort) and Clemence Poesy (Fleur Delacour) who I mainly know from Harry Potter. I hadn’t seen a Martin McDonagh film before and I didn’t know anything about it going in. However, as it turns out, I was pleasantly surprised, as this film turns out to be one of the strongest that I’ve seen lately, with brilliant, black humour, a compelling cast and an intriguing plot.

Ray (Colin Farrell) and Ken (Brandon Gleeson) are two hit-men who have fled to Bruges under orders of their boss after Ray accidently killed a child on his first job. Awaiting orders from their boss, the two find themselves getting into trouble of their own when Ray ends up insulting some tourists and winding up on a date with a local resident Chloe (Clemence Poesy). It’s a fairly simple plot that escalates a lot in the third act, ending on an incredibly tragic note, but despite that, the majority of the film keeps a humorous and black comedy tone with a few humorous moments (mainly coming from the foul-mouthed Ray) in there.

The characters are fairly simple. Ray is the foul-mouthed hitman who’s starting to feel incredibly remorseful for his botched job, and Ken is the old, more experienced man who just wants to explore the many tourist attractions that Bruges provides. However, both Colin Farrell and Brendan Gleeson put in a really good job as the two characters to make them engaging, interesting and compelling leads. It helps that the supporting cast is good as well, and McDonagh’s script manages to get the most out of pretty much everything with some excellent dialogue that really helps make this film entertaining, blending the mix of a serious tone with some more light hearted moments incredibly well. It’s also worth noting the Ray and Ken’s Cockney mob boss, played by Ralph Fiennes, who does an amazing job at bringing the character to life, even if he may not be as well developed as Ray and Ken are (Case in point, I don’t even remember his name).
Normally, I’m not the biggest fan of the use of opening voiceovers, apart from a few exceptions, but In Bruges is one of those rare films where it works. Right from the opening lines, “After I Killed Him, I Dropped his body in the Thames and washed the residue of my hands off in Burger King and walked home to await instructions,” you know what kind of film you’re going to get and it throws you right into the story without wasting any time at all, which is a welcome change from the more recent films like The Equalizer that take ages for something to actually happen. It’s direct, and really works well.

Something else that’s also worth noting is just how well the choice of the city of Bruges plays into the film. In good movies centred around a single place, that place can often feel like an extra character of the film or TV series – for example, anyone who will have seen Firefly will know that the ship Serenity is very much a cast member in her own right. It’s the same case with Bruges in this film, with the medieval city serving as a spectacular backdrop to the movie that really works, with some great cinematography and directing that really allow for some excellent atmosphere.

Whilst the film balances its action and pacing pretty well for the most part, the third act escalates the tension and doesn’t really work as well as the rest of the film does. Its climax is almost too convenient, but it despite this it can work well and I’ll probably warm to it on repeat viewings, because this is certainly not going to be the only time that I’ll watch this film given that it’s left such a powerful impression on me.

If you haven’t yet seen In Bruges yet, I urge you to watch it when you can. It’s part crime thriller, part black comedy and part tour of the city of Bruges, as it examines its lead characters incredibly well. It’s one of the strongest films that I’ve seen this year and as a result I can’t recommend it enough.