As I’m participating in the Great Self Published Fantasy Blog-Off, I thought I’d offer an update on how I’m doing with my progress and talk a little about the books that I’ve received to review. 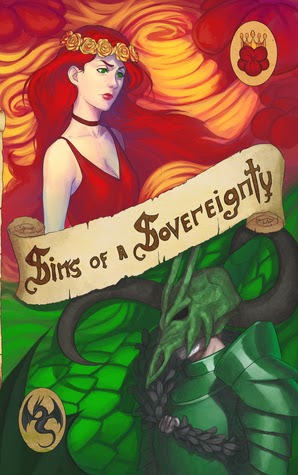 This is something I’ve been meaning to do for a while, offer a status update on where I’m at. In case you’re not familiar with the main event though, and are wondering what a Great Self-Published Fantasy Blog-Off is, you can check it out here. It’s an excellent project from Mark Lawrence, and it’s great that it’s been put together and there's a load of awesome bloggers participating, so if you haven't checked out their blogs yet, you're missing out on some great content. However, let's switch the focus back to the first State of Play Article that should hopefully become part of a series, running the length of the Blog-Off, and I'll use this article to talk about the books that I’ve received to review, the ones that I have read already, my progress and the ones that I am going to read next.

That’s a lot of books to get through, twenty seven in total, all taking up a lot of room on my Kindle Fire. I’ve highlighted the books that I’ve read in bold, and as you can see, it’s only two so far, and I know a lot of the other bloggers are more progressive than I am. One of the main problems with me is that I’m in the middle of Foundation Degree stuff at the moment, and have three different essay assignments, a presentation and a Exam to do as part of my History with English Course, so as you can see, I’ve had to divide a lot of my time between that and blogging. I also contribute weekly reviews of Game of Thrones, Daredevil, The Flash and Arrow over on All-Comic (link in the sidebar), so that takes up a lot of my time as well. But, once my first year wraps up at the end of May, I should be able to focus my full attention to the self-published fantasy side of things.

Right now I’ve been keeping a schedule review wise so it’s a book, a film and a TV season review posted right after the other - for example, my last three reviews were The Walking Dead Season 3, Pronto by Elmore Leonard and Glen Ficarra/John Requa's Focus,   but come the end of May I’ll switch the focus primarily to the Great Self-Published Fantasy Blog Off. Most likely I’ll dedicate most of June to getting as many of the books read and reviewed as I can, because I’ve also got to balance this with the review copies that I’ve been receiving from traditional publishers. My main approach to this has been, with a few exceptions here and there, I’ll read one traditionally published novel and then one self-published. I like to have two books on the go, one in print and one on the kindle, so at the moment, I’m currently reading Naomi Novik’s Uprooted (about 11% through according to my Kindle) and am about to start Michael Dobbs’ House of Cards (The inspiration behind the Netflix Show, which I recently won in a Goodreads Giveaway – plus, my brother, who’s also a fan of the show, wants to read this so I have to get it out of the way quickly) in print. After I finish Uprooted I’ll start a self-published book, just to give you a quick update on the process. I’m a relatively fast reader once I get stuck into reading the books, so with all said and done, I should certainly be able to complete the sorting through the slush pile by the deadline. These things take time, and also, I’ve received loads of really interesting books so far, which thus makes it incredibly hard to pick which ones to start first and which ones to continue with.

The first two novels that I went with were Patty Jansen’s Fire and Ice, and Robert Courtland’s Jack of Troubles. You can find my review of Fire and Ice on the right under the Author Index (click on the name of the author to take you to the review link), and my review of Jack of Troubles should go up in the next week or so. I thought I’d share the blurbs and the covers of both of these two books, which are currently available on Amazon to buy (Fire and Ice is free!) if you want to check them out for yourself. 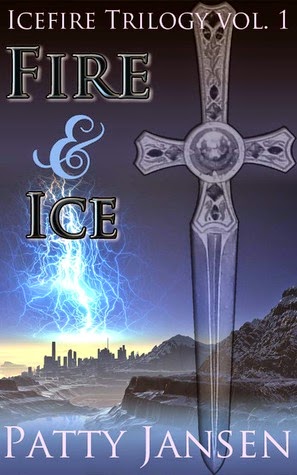 Working in his uncle's butchery in the City of Glass, Isandor knows that he has a strange ability. He can turn animals in to ghosts by cutting out their hearts. He knows it's magic and not allowed and has to stay hidden if he is ever become an Eagle Knight.

Then a stranger arrives in town. He is the sorcerer Tandor and he claims that he can help Isandor become a Knight, in return for a gruesome task: to bring him the heart of the Queen.

Jack of Troubles by Robert Courtland (Crystal Deck of Ryuu #1) 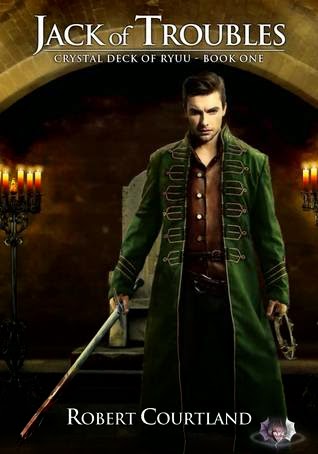 Dara, one of the Simmasi Royal Rangers, is tasked with escorting Prince Shaelon across the Simmasi Kingdom. It proves more challenging than either one could guess when they are beset by assassins trying to make sure the Prince doesn’t reach his grandfather’s army. As her King knew she would, Dara goes further than her original orders, offering to both protect and fight beside the Shaelon as he leads the army his grandfather assembled to reclaim their ancestral throne. The army is up to the task if Dara can just keep Shaelon alive long enough.

Both of these books sounded pretty interesting and I enjoyed them both to certain extents. Whilst Fire & Ice may have its problems, it was imaginative and had some wonderful world building. Jack of Troubles was a pretty good read with a strong female lead in the form of Dara, as I found myself thrust into a strong book that had me engrossed right the way through. Both were, despite being epic fantasy, very different and offered some interesting variety. It also helped that they were also pretty quick reads, and I was able to get through both fairly easily. Will I pick them as my final novel to nominate? It remains to be seen, but at the moment Courtland’s Jack of Troubles has a strong shout as a possible early contender. I’m yet to actually abandon any novels without finishing, even if I have only read two, which is a good sign.

It also helps that there are plenty of interesting looking novels to come as well. I’ve got twenty five left, and the best novel from the bunch could very well be the last one that I read, or the next. I never know quite what I’m going to get especially with it being quite common that these books will have little or no reviews on Goodreads. What other people have said tends to give me a good idea about to what to expect, even if I end up making my own judgement. Is this book going to be a quick read or a long haul to the finish? That sort of thing. For instance, there are currently no reviews for Jack of Troubles on Goodreads. There were a few for Fire & Ice. So that said, it’s interesting, as this whole process is something new, fresh and exciting. I read a few self-published books occasionally from time to time, but there’s loads more out there that I haven’t got around to yet, with plenty of potential to be the next Brandon Sanderson or even George RR Martin.

With that in mind, I  thought I’d share what the next five books (covers and Goodreads blurbs) that I plan on giving a shot from the slush pile as well, and will provide another update before the end of May as to where I’m at with these novels, as well as anymore that I’ve read in that time period – I’ll probably do a paragraph on anything that I didn’t finish to let you know why, whilst aiming to offer longer reviews to the ones that I’ve completed. A review of Jack of Troubles should go live within the next week or so.

The Garden of Hugo Vuerloz by Ellis L. Knox 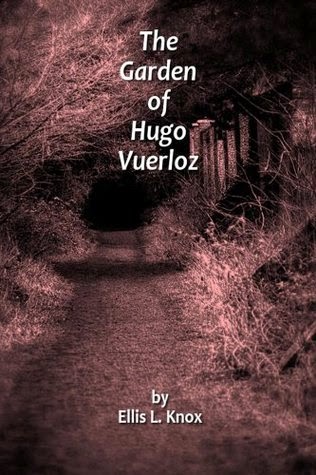 Hugo Vuerloz believes he has discovered the scientific underpinning for all magic. When his beloved Annelise is killed, he finds there are darker uses for his discovery.

John Mead is Hugo's old friend. When he brings a mysterious package to Hugo's castle in the Swiss Alps, he becomes entangled in Hugo's bizarre world of scientific magic. But Mead isn't the only one coming to Walensee. Sinister and secret forces are determined to seize Hugo and his discovery. Now Mead has to decide whether an old and brittle friendship is worth risking his life. 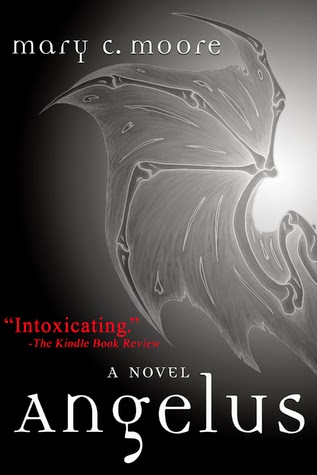 Angels. Demons. Creatures of myth and legend. Or so they would like you to believe. Look closely, that curly hair may be covering horns, or that long jacket could be hiding wings. They walk amongst us, and they are just as human. Genus: Homo, species: angelus. Just as mortal as you or I. Vulnerable. Endangered. But not yet extinct.

And Sarah Connelly’s job is to ensure they survive.

After Life by Daniel Ionson 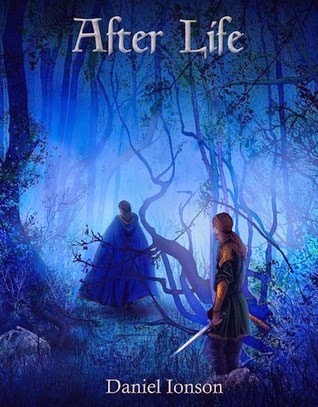 ~Dark Age fantasy shrouded in mystery and horror~
Fear erupts in the nation of Gaescea when Seer Mecas returns heralding a cryptic doom, and Kaemen and his fellow warrior-elites, the Wolfhounds, make ready for war.

But Kaemen discovers that the kingdom’s preparations were for naught when he awakes in a realm far more harrowing than the battlefield, for they have crossed over into the Land of the Dead.

Now Kaemen must fight for the salvation of Gaescea, knowing all the while that he is being hunted by damnation. 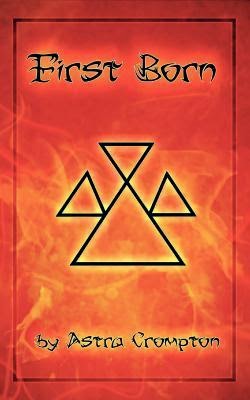 For the First Born of the Muzina people, life is a cursed existence meant to offer their mothers a chance to develop strength of character and prove self worth. When allowed to live, these babes are set on a path of torment and ill fortune that hounds their lives until they finally perish. Kathiz T'Kazan, a boy of unquenchable hope, does not shy away from living, and so willfully faces the consequences...

Sins of a Sovereignty by Plague Jack

Ten years ago a terrifying superweapon left one of Amernia’s most illustrious cities permanently shrouded in poisoned fog. Over the past decade, three great evils have haunted the Amernian people. First is the elusive Blood Queen, who holds Amernia in an iron grip. Second, are the entombed old gods, who speak only to a chosen few. Third is the nation's scar, a seemingly endless expanse of green miasma that has claimed the north. The rift between rich and poor, human and nonhuman, divides the kingdom more every day. As a spectral rider streaks across the sky, heralding the death of kings, foreign nations circle like vultures hungry for a feast. Legendary veteran of two wars, Sir Clark Pendragon, is sent north to quell the rising chaos. New alliances will be forged and broken as a Wild War threatens to tear Amernia asunder.

These were all books that I picked primarily at random. I don’t really have a method for picking novels to read – I just like to shift through the slush pile and pick one at random, so as a result I often get an interesting mix of variety. These five books are all on Goodreads as well, by the way, in case you want to check them out for yourselves. I'd also be interested to hear whether any of them caught your eye or not, so feel free to leave a comment below.
Posted by Milo MJ at 17:24