I review the second novel in The Shadow Campaigns series, The Shadow Throne, a military flintlock fantasy novel from Django Wexler, published by Del Ray and currently available to buy in both the USA and the UK. 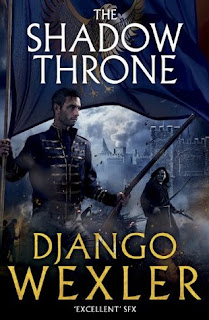 The King of Vordan is dying, and his daughter, Raesinia, is destined to become the first Queen in centuries.

But politics knows no loyalties, especially for Duke Orlanko, Minister of Information and spymaster of the empire. The most feared man in the Vordan will bow his knee to no Queen, unless she is firmly under his influence.

Freshly returned from their recent victories in the colonies, Colonel Janus, Marcus and Winter must play a new and far deadlier game than the open warfare of the front, using all their talents, earthly or supernatural.

The first novel in the Shadow Campaigns series, The Thousand Names, was pretty awesome and it’s great to finally get the chance to read the follow up, The Shadow Throne, which plunges the main characters into rebellion that seems heavily inspired from the French Revolution,  and it’s pretty clear to spot the influences of such events like the Storming of the Bastille in 1789, or at least it is pretty clear if you have previously studied the French Revolution like I have, and it’s great to see an area of history that you are familiar with inspiring a novel as it also potentially gives you an idea for the direction where the Shadow Campaigns might take next (Eventually, The Terror?), however, that said, it could end up going in a completely different direction so it should be interesting to find out, because based on the quality of The Shadow Throne and its predecessor, I will most certainly be returning for the third novel, the benefits of course being a year late to this book being that I don’t have to wait long before getting stuck into the new novel.

The Shadow Throne brings politics to the centre of The Shadow Campaigns as we find the King of Vordan on the verge of death, and his daughter, Raesinia, is destined to become the next heir to the throne. However, that presents a problem for the remaining politicians who have loyalties to nobody but themselves, with Duke Orlando, Minister of Information, will bend his knee to no Queen unless she answers to him, which is something that Raesinia has no intent of doing. And cast into the middle of this melting pot is the likes of Corporal Janus Vhalnich, Marcus D’Ivorie and Winter Ihrenglass, who have just returned home from their victory and find themselves thrust into a power struggle for the throne, caught on different sides of the conflict.
With Raesinia being a strong, fresh and intriguing female character, we get an extra layer of excitement added to the second book as old favourites are continued to explored and the characters themselves continue to be powerful and well developed. I was never bored with the various ongoing storylines that each characters found themselves in, and the pace moved quickly enough to make this novel unputdownable towards the end, and I finished the final third or so of the book in pretty much one sitting, balancing world building with plot and character development very well indeed.

Django Wexler continues to offer something different than the standard clichés fantasy fare of a prophesised hero saving the world, blending military fantasy with political fantasy very well indeed. The characters themselves are varied, diverse and interesting with a solid core of both male and female cast alike, with most of the time spent with Raesinia and Winter, and coupled with an engaging plot, The Shadow Throne has all the ingredients needed to make a successful follow up novel that’s just as good as the first one, if not better.

Chances are, fans of The Thousand Names will have already brought The Shadow Throne by now, but if for some reason you’ve read book one and not yet returned then I urge you to remedy that as soon as possible, because this is a fantastic experience that continues Django Wexler as a must-read fantasy writer. There certainly won’t be as bigger gap as before (I think I read The Thousand Names on a Ferry to France last August), and I can’t wait to get stuck into The Price of Valour when it’s released early July.