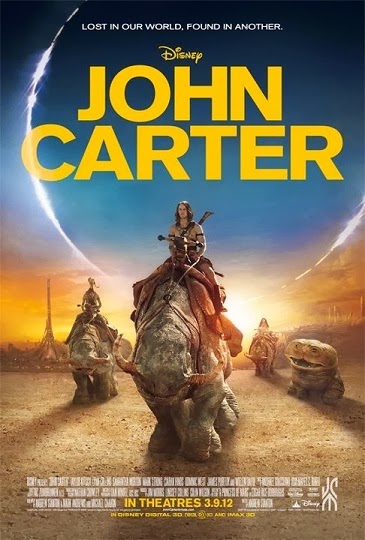 John Carter was a film that debuted in 2012 to a relatively poor reception for the critics, yet despite this, the film remains a decent movie that is still fun to watch. By no means is it groundbreaking, awe-inspiring or a excellent movie, but for your money you could do a lot worse than this. It's just a shame, because the film had the potential to be a lot better than it was - but had an overbloated budget and overbloated storylines that as a result meant that several parts suffered.

After the sudden death of army Captain John Carter (Taylor Kitsch), a former American Civil War Confederate Captain, his nephew, Edgar Rice Burroughs is called to the funeral, and receives Carter's possessions, and it is there that Burroughs learns about Carter's journey to Mars through his journal, which was one of the possessions given to Burroughs in Carter's will. Cue a flashback sequence where the storyline really gets into gear, showing Carter being chased by Apache Cavalry into a cave, where he gets transported to Mars. It is there that he meets Dejah Thoris (Lynn Collins), a princess of Helium, which is  one of the few cities remaining against Sab Than (Dominic West)'s army. Dejah Thoris has fled the Helium, disguised as a soldier in an effort to avoid a proposed marriage to Than whose marriage will bring peace between Helium and Than's mobile scavenger city.

The film itself looks terrific visually, with several stunning scenes of CGI. There are several action-packed scenes that are pulled off exceptionally well with the visual effects, and it could have been a whole lot worse in that department. However, what John Carter gains in special effects, it loses in other aspects. Despite great looking action sequences they are for the most part uninspiring, and although the film does have a good layer of humour it can feel a little cheesy at times. It's not the most original film you'll ever see as well, in part due to its background as a novel adaption, as it blends pretty much every science fiction/fantasy/superhero film that you've seen before, sprawling and easy to dismiss - but despite all these flaws, its biggest achievement is actually that it's watchable. In fact, John Carter is more than watchable - it manages to be a delightfully entertaining romp.

Something else that's worth noting as well is Michael Giacchino's soundtrack - it might not be the level of the likes of Hans Zimmer or even James Newton Howard but it's still pretty solid and fits well within the movie.

If you're willing to go into the film with a huge suspension of disbelief and relatively low expectations then you should end up enjoying John Carter. It makes for a good, fun action movie with excellent special effects - there aren't any real standouts amongst the cast, but at least Lynn Collins' Dejah Thoris gets something to do rather than just play the traditional role of damsel in distress, and Talor Kitsch portrays a likeable and rootable John Carter. Other good actors like Bryan Cranston and James Purefoy get fairly small amounts of screentime, but bring some welcome quality to the film.