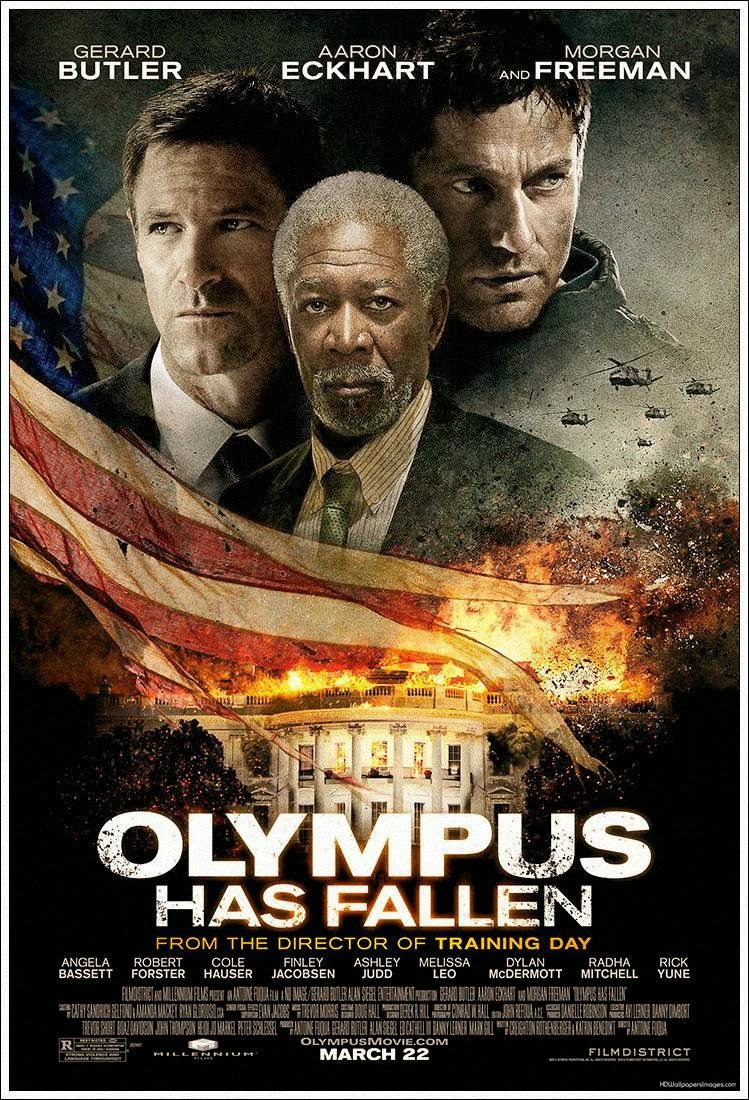 Last year, there were two movies that shared a similar theme of the White House being invaded. The other was White House Down, directed by the same person responsible for Independence Day. However, Olympus Has Fallen's director Antoine Fuqua was the man behind Training Day, and has brought along with him an impressive cast of the likes of Gerad Butler, Morgan Freeman and Aaron Eckhart for an impressive result that although is heavily flawed and heavily a patriotic movie geared more towards Americans than anybody else, still manages to be very fun if you go in with your brain switched off and low expectations.

Gerad Butler plays former Secret Service Agent Mike Banning, who is now working at a desk job following a mission that went wrong, leading to the death of President Benjamin Asher's (Aaron Eckhart) wife. When the White House is breached by a terrorist force lead by the mysterious Chinese Kang (Rick Yune), Banning finds himself alone inside the White House and America's only hope of getting the President and his son out alive. It's his chance to redeem himself, but it's not going to be easy - Kang holds several leading staff members at the White House hostage and three of them, including the President, know the codes to Cerberus - a protocol that could destroy American Nuclear Missiles, leaving the USA vulnerable to a nuclear attack. The tension is always high and it never lets up - even if it does use almost every single cliche in the book.

First off, the action sequences are thrilling. The attack on the White House in the opening half hour of the film is pulled off incredibly well - and the movie manages to create a strong element of tension even if the end result is ultimately predictable - of course you know that the Americans are going to end up saving the day. But that doesn't stop you enjoying the ride while you're at it - Olympus Has Fallen is a great throwback to to the '80s style action movies and allows for a very entertaining flick that will be interesting to see how it compares when stacked against White House Down.

The A-List supporting cast may include an-always impressive Morgan Freeman as the Speaker of the House - who takes over the role of the acting President of America once Aaron Eckhart's President is held hostage, but it's Gerad Butler's show. He's your typical anti-authoritan tough guy - very similar to the likes of Karl Urban's John Kennex in Fox's Sci-Fi TV show Almost Human, but his casting choice manages to, for the most part really work - and pulls off some good action scenes even when the initial assault is over and done.

If you're expecting a morally grey film then this is not it - the Americans are all portrayed as the good guys with the terrorists portrayed as evil - and none more so than  Rick Yune's Kang - who despite a few attempts to assure President Asher that he's just as bad as him it doesn't quite pay off. It also doesn't help that the film takes itself too seriously - if you're expecting some form of satire then you're going to be disappointing.

Olympus Has Fallen's biggest achievement is that it is actually enjoyable. Its final act may start to wobble and the CGI is not all great but it provides a very fun and entertaining blockbuster movie despite the fact that it's riddled with cliches. You easily fit a bus through the size of its plotholes but if you like decent action movies with some good cast then you should find something to enjoy here. Just don't go in expecting a masterpiece.