I share my thoughts on the remake of Robocop, directed by Jose Padilha, starring Joel Kinnaman, Gary Oldman and Samuel L. Jackson. 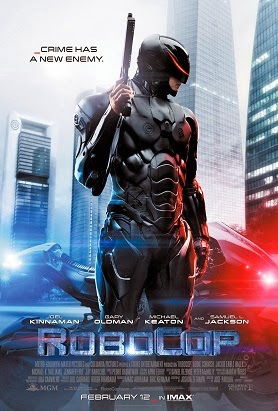 Robocop was the first movie that I saw at the cinema in 2014 and despite the fairly negative reaction that it has from press I ended up enjoying it, but even despite this there are some crucial problems to be found in this film - however it's safe to say that this is a remake that isn't actually bad, although despite this you can't help feeling like there is a boatload of wasted potential to be had here. The film could have been so much better, but the end result perhaps sums this film up best as a disappointment.

Set in 2028 Detrioit, Alex Murphy (Joel Kinnaman), an all round good cop, a loving father in a good household, is critically injured when his car blows up outside his house - with him inside. As a result the multinational corporation OmniCorp - see their chance to put forward their perfect part man/part machine after the initial designs were deemed too inhuman. Alex however is presented as the perfect chance to bring their controversial technology to the war on Crime, and he's put inside of the suit with help from Dr. Dennett Nordon (Gary Oldman).

There are a load of new ideas that Robocop brings to the table - the opening sequence in particular is worth noting, when the staged opening sequence in a nameless Middle Eastern city, shows OmniCorp's initial robot designs, ones that are all robot and lack anything remotely human - end up terrifying the people they are meant to protect more than the actual enemy. It isn't long though before we're in Detroit proper - and the film's futuristic setting as a result looks very similar to the likes of the TV show Almost Human, and has the occasional amount of futuristic elements but it almost feels like there could be more done to show that you're in the future - which is the same problem that both creations suffer from. They don't feel futuristic enough.

The cast, for the most part is pretty solid. The standout really is Gary Oldman's Dr. Dennett Nordon, the creator of the Robocop suit. The propaganda-spewing news presenter played by Samuel L. Jackson also was a great touch to the film, whilst Joel Kinnaman is a solid Alex Murphy but he lacks any real distinctive performance.

The movie certainly feels toned down to fit its age-rating and looks tame in comparison to the original, but as a result suffers due to there not really being as much action as one would like. There are some pretty cool fight scenes shown within but there's just not enough of them. One thing it has going for it though is the great special effects - nothing really looks out of place and there aren't any blatantly obvious elements of weak CGI.

Robocop then, is a rare remake that's actually far better than it could have been. Time and time again we've seen remakes and re-imaginings suffer, but that's not the case here. The film is decent enough and is watchable, but you probably won't go back for a second viewing - which is a real shame because it had the potential to be so much more. But still, despite anything negative said here - you should give this film a watch - just don't go in expecting great things.