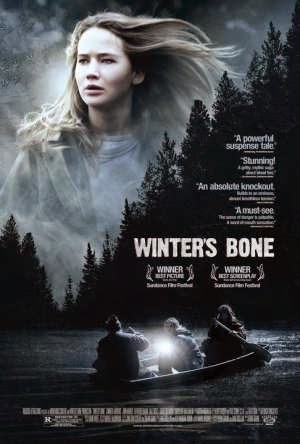 Since Winter's Bone, Jennifer Lawrence has risen to international stardom following her roles in films like X-Men: First Class and The Hunger Games, and most recently American Hustle -  but for me, Winter's Bone is her best performance as an actress. The film itself is very much in the noir genre, and a critical success - following the adaption of Daniel Woodrell's novel of the same name. Lawrence herself plays Ree Dolly, a teenager who in order to prevent her family from eviction, must find her missing father. If you're a seventeen year old teenager reading this and you think you've got problems, Ree's will undoubtedly be far worse. Want to disagree? Well, unless you've ever had to tell your younger relative what parts of a squirrel to eat, and are the person responsible for raising your two younger siblings - then you're wrong. As a result of this film Ree emerges as one of the most powerful, most well developed and strong female characters of cinema that I've seen, as Jennifer Lawrence's character joins the likes of Sandra Bullock's Dr. Ryan Stone among several others. Forget Katniss Everdeen - Ree is simply the better character, and the result of the better performance from Lawrence.

John Hawkes plays Ree Dolly's uncle, known as Teardrop, who like pretty much everyone in this movie, is involved with drugs in some form or another. His role is as unpredictable as the film's outcome - the audience is left guessing as to whether he will kill, assault or help Ree. Whilst this film may not be the fastest-paced drama ever - turning out to be a slow burner, you will find yourself rooting for Lawrence's Ree and her family, and the struggles that she must endure. The pace is solid and there aren't any boring elements, with it rapidly gaining momentum as it goes on. I'm glad that the film remained only 100 minutes long - and like Gravity, it proves that the longer the film doesn't necessarily mean the better it will be.

The scenery is amazing. Set in the Ozark Mountains of Missouri, the film allows itself for several stunning backdrops, serving as a nice welcoming change from the usual mountain/rural communities that we get in Hollywood movies. The film is unlike anything I've seen before in terms of location - in fact, even if its genre - billed by Peter Bradshaw in his Guardian review as "hillbilly-gangster-realist-noir" is new. But regardless, there's one thing that you shouldn't go into this film expecting, and that's it to be emotionally uplifting. It's not. You'll be emotionally drained by the end of the film, and it's incredibly depressing and will stick in your mind for a long while afterwards. But that's in a good way - Winter's Bone is a stunning film and has easily become one of my favourites.

Winter's Bone claimed several awards and it's easy to see why. The cast is stellar and the movie is very solid indeed - don't go in expecting character lines divided clearly in black and white. In that aspect alone it's very different from the movies that I've seen this week alone, and is easily the best of them. Winter's Bone is certainly - without a doubt, the best film of 2010 - and that's in a year that gave us Inception, which was another incredible movie, if a tad overlong.

Like most of the movies that I've reviewed lately, Winter's Bone is on Netflix. And I can offer my highest recommendation to any Netflix users - because it's just too damn good not to pas sup on.