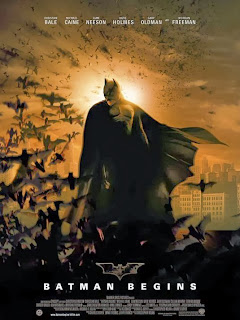 Batman Begins is the start of The Dark Knight Trilogy and delivers a gritty, dark reboot for the Dark Knight following the disastrous Batman and Robin film that seemingly ended any future hopes of a Batman film on the cinema. However, it wasn't long before Christopher Nolan (Inception) decided to get into Batman Begins and deliver his own take on Bruce Wayne and the character that turned out to be for many, the defining portrayal of the character on screen. Whilst Batman Begins may not be quite the level as its direct sequel, The Dark Knight, it proves that it's still one of the best comic book movies out there, made largely possibly due to its great cast and strong script by the writer David S. Goyer. Exploring a non-linear storyline with plenty of flashbacks to Bruce Wayne's past, Batman Begins turns out to be one of the best origin stories for any superhero in cinema. It's strong and consistent, and can be highly recommended as a good starting point if you want to get into superheroes but are not a fan of the more otherworldly element that the Marvel Cinematic Universe brings to the table.

Most people know the origin of Batman whether you're a comics fan or not. A son of wealthy parents, Bruce Wayne (Christian Bale) quickly finds himself orphaned at a young age when his parents get shot following an abrupt departure from a theatre, by a homeless man named Joe Chill. With only the ever reliable Butler Alfred Pennyworth (Michael Caine), and childhood friend Rachel Dawes (Katie Holmes) to rely upon Bruce soon is driven down a path of justice, ending up touring the world to learn various methods of fighting. Unlike Robert Downey Jr.'s Iron Man, who simply inhabits the suit of armour, Bruce has to learn several fighting styles. Eventually, after locking himself into a prison, he's introduced to Henri Ducard (Liam Neeson), who tells Bruce about the League of Shadows. It is there that Bruce will receive his training, but when he learns that the League plan to destroy Gotham, Bruce starts a one man war on crime in order to prove that the city can be saved, encountering villains like The Scarecrow (Cillian Murphy) as the plot cleverly builds up to a final conflict with Ra's Al Ghul and the League of Shadows. Several comic book elements are structured in a much more 'down to earth' way, and Nolan and Goyer choose to utilize characters like Scarecrow and Ra's Al Ghul as opposed to main heavy hitters like The Joker and Two-Face. It's a ploy that turns out very well indeed, and both Neeson and Murphy are cast well and pull off their roles incredibly strongly. 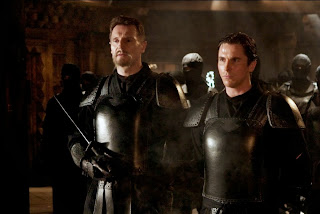 On the other side of the scale, we also have plenty of good casting choices in the non-Rogues Gallery. Gary Oldman delivers a strong portrayal of Sergeant (not yet a Commissioner) Gordon, Michael Caine delivers an iconic Alfred Pennyworth and Morgan Freeman makes Lucius Fox his own. With such veteran actors you really can't go wrong - delivering strong performances alongside Christian Bale's Bruce Wayne. Whilst Bale plays a better Bruce Wayne than Batman, playing the role of the billionaire playboy perfectly, the main weak link of the casting if there had to be one is Katie Holmes, and her character, whilst playing a decent role, doesn't have as much impact as the rest of the cast did, which is a shame as she's the major female star.

The film moves along at an action packed pace. It's fast, clever and engaging, linking several plot threads together in a compelling and strong way that combines flashbacks and the advancing storyline to advance the plot, made even more amazing by the strong soundtrack provided by Hans Zimmer. The overall visual quality of Batman Begins is pretty decent as well, but there are few things that don't quite work. Some scenes such as the use of CGI to make Scarecrow look more intimidating don't quite work, but by and large the film is a success in that department.

There are a few other flaws as well. The Birthday Party scene feels cringe-worthy and unnecessary, and the chemistry between the two leads, Christian Bale and Katie Holmes, is pretty much nonexistent. However, aside from that, the end result is an enjoyable film and a welcome return to form for the Batman franchise that will ultimately be eclipsed by its sequel, The Dark Knight. Giving the franchise new life following the mess that was Batman Forever and Batman and Robin, Christopher Nolan delivers a strong first outing for Batman and makes this a must see for any Batfan. As a result then, Batman Begins, despite its flaws, comes recommended.