I review Gears of War: Judgment, the latest game in the Gears of War military science fiction video-game series. 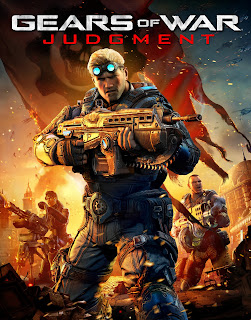 I've been a fan of Gears of War ever since I first got my Xbox 360 which came with a copy of #2. I've been playing the series ever since, having thoroughly enjoyed both #2 and #3 and it was only a matter of time before I got around to picking up Gears of War: Judgment, and of course I enjoyed it. It's a fun, action packed, hardcore military science fiction game with plenty of entertaining elements that make this game another enjoyable installment even though it's not a continuation of the main storyline in the trilogy. Instead, Gears of War: Judgment lets you play for the first time in campaign a character who is not Marcus Fenix - Damon Baird, a lieutenant in command of Kilo Squad, consisting of one other familiar face Augustus Cole, and two newcomers, Garron Paduk, who fought on the losing side in the Civil War only to end up fighting with his former enemies in defence of Sera, his homeworld - and Sofia Hendrick, a young recruit to Onyx struggling between her strong thirst for military success and her disobedient nature. Of course, Sofia is not the only anti-authoritan member of Kilo Squad. Baird and Cole have little respect for their commanding officers and Paduk has no joy in fighting under command of his former enemies. It's interesting and fun to see Baird and Cole fleshed out beyond stereotypes into actual characters - and have two fresh faces to the campaign.

The game itself opens with Baird, Paduk, Hendrick and Cole being brought before Colonel Loomis having committed an unspecified crime. It uses brief cut scenes to flash between the present and the past and weaves a clever narrative that weaves an interesting and compelling plot. The campaign itself may not have the same length or depth as Gears of War 2 with Judgement's main focus on multiplayer, but it's still a pretty interesting storyline with some strong chemistry between the squad to boot. One of the biggest achievements of Judgement is to make Marcus Fenix feel not needed, as well as keeping the game fresh and alive, as though it is our first Gears of War game and not the fourth that we've had. The previous games I've played so far in the franchise I've enjoyed and Judgement is no different - it's a fun, third person shooter and will have you enjoying every second. 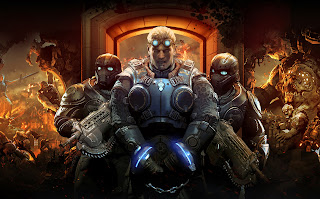 Damon Baird, the main character of Gears of War: Judgment

Fifteen years before the events of the main trilogy, Gears of War: Judgement really makes the characters of Baird and Cole unfamiliar from the original trilogy. They're clearly the same characters yet they are not - with the game itself being surprisingly effective at exploring the characters and giving us a look into the new recruits as opposed to the battle hardened veterans. You'd be hard pressed not to root for these characters - Baird opts to do what is right over keeping his terrific military record, and Cole is clearly not happy with the conditions that he's now in, having been used to a life of luxury and wealth as a sports star. Paduck and Sofia are also developed as well, and it's interesting to see some new additions to the franchise and the chemistry that is there as a result. There's plenty of snark and witty banter to be found here - it's the Gears of War we know and love.

If you've played the previous three games then the controls and core mechanics are pretty similar. There are a few new additions though, for example - when you die in the campaign you won't get the same Locus the next time you spawn keeping a fresh feel to the game, and the enemies are just as likely to attack you from behind as the front. No longer is the cover system as safe and reliable as it was before. And there's also a new addition, before the start of each section, you'll see a symbol that gives you a certain challenge. For example, you're only allowed to use certain weapons or you're up against the clock. It makes for a fun challenge indeed and an interesting addition to the regular Gears of War series, and are entirely optional - with a scoring system added to the mix as well to provide further challenges. You'll certainly want to be going back and gaining more stars once you've finished the main campaign, as additional content, such as the Aftermath campaign is unlocked.

The gameplay itself relies a bit more on teammates this time around. You can no longer just run at the enemy and expect results - the fellow members of Kilo Squad are more alert and the AI is better than it was before, with faster moving and smarter characters, who also have the ability to set up sentry guns in the more complex levels. The game itself is rapid and mobile, and an interesting twist on the normal Gears of War franchise. But above all, it's fun. 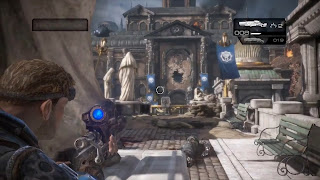 Gameplay in Gears of War: Judgement

However, not even this latest addition of Gears of War is perfect, because there are some flaws to it. You'd think that they'd get the boss villains right by now but General Kharn, despite being labeled early on as a massive threat, doesn't get much of an impact due to limited screentime, and when he does eventually dominate the game as the final boss the end result is short lived and anticlimactic, made even more fustrating by the upredictablity of your AI teammates. Yes, they may be smarter than previous incarnations, but when it comes to reviving downed human controlled Gears they're as unpredictable as ever, and will not always revive you.

Even though I don't have Xbox Live the game itself is split-screen and I got the chance to experience multiplayer with Bots and once with a friend - and enjoyed what I saw. OverRun is an interesting mode where you play as either the Locus or the COG and combines the Beast and Horde modes together in one to create an interesting and engaging dynamic that also is a handy way of filling the 15 year gap between the events of Judgement and the start of Gears of War 1. Each side is interesting to play as and brings different benifits to the table - Locus for example have Tickers and several other monsters whilst the COG benefit from a four different classes that each provide you with a different character, for example the Medic is Sofia and the Soldier is Cole. Other modes are fun too, Survival now makes up for the lack of Horde, but takes it in a different direction from Gears of War 3 and as a result falls short, being a lot less enjoyable than the Horde of the previous installment.

Overall then, Gears of War: Judgement is a fun game. It's fast and intelligent combat combines with rootable lead characters and a fresh take on the franchise to prevent this game from feeling like a direct copy of the previous entry only with a different storyline. Whilst the weak boss villain and the AI can still be frustrating at times Judgment is just as enjoyable as previous entries and continues to make me hope that there'll be another game in the series, providing a lot of fun. It's not the best game of the year but it's a welcome return to the franchise, and I hope that there will be more in the future.