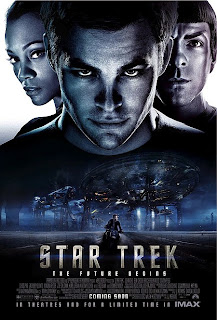 As you've probably noticed from the above text, Star Trek (2009) is my first encounter with the franchise. I've largely gravitated towards Star Wars over Star Trek and it's been one thing that I've largely avoided up til now for something that wasn't very clear. When Star Trek aired on TV earlier in the week though I felt compelled to check it out, and ended up enjoying it. It may be far from a perfect film but I think the word that should be used to describe Star Trek, or at least the 2009 version,  the most is "fun". By making a divergence from the canon Abrams is able to appeal to newcomers of the franchise like myself and presumably keep old fans happy by keeping several core elements there. The plot itself is very much in the style of a summer movie blockbuster with plenty of action sequences (some of which do naturally feel necessary and over the top), allowing for a firmly enjoyable movie.

Casting Chris Pine and Zachary Quinto as James T. Kirk and Spock, Star Trek takes place in a world where Kirk and Spock were never friends. I may not have ever seen an episode of the series before but I know enough about it to know roughly which changes were made and it's good to see a different approach that actually works quite well. The characters origin stories are delivered in a fast way - Kirk's father sacrifices himself to save his wife and unborn son forcing Kirk to grow up without the influence of his parents, whilst Spock meanwhile is based on the planet Vulcan, an outcast due to the fact that he is part human, which naturally causes resentment from the Vulcans. Spock leaves his homeworld to join Starfleet, just as Kirk, after getting involved in a barfight, agrees to sign up. And what unfolds puts Spock and Kirk against each other for a large part of the film, disagreeing with each other and becoming rivals.

The plot is fairly decent, although not without its flaws. For example, Eric Bana's villain Nero doesn't actually appear all that intimidating and threatening, robbing the script of some of its predictability - you never feel like any of the characters are at risk. Whilst this sort of comes with the territory of an origin movie I would have liked a bit more uncertainty in the eventual outcome The story however makes up for it in the element of fun it gives us. The blockbuster feel is certainly there, something that seems similar to Star Wars III in terms of grand action spectacular in space, but unlike Revenge of the Sith the film here actually manages to make everything interesting and fun. The casting supports the overall strength of the plot by delivering some pretty good elements - Zachary Quinto for example portrays a completely different character to his role in Heroes with no glaringly obvious similarities. Pine doesn't start as strong as Quinto in the role of Kirk but by the end of the movie I felt that his performance had improved considerably. Then there's Karl Urban who shines as McCoy, delivering a strong performance that I felt was one of the best on offer. 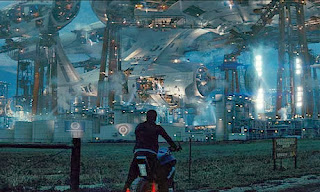 I've already highlighted Eric Bana's less than impressive villain and whilst I'll have to admit he is an impressive actor the script doesn't serve him well here as he's delivering one cheesy line after the next and doesn't gain a significant amount of screen time to help him establish himself as his own character. Anton Yelchin doesn't really impress as well, his comic scenes as Chekov not working that well. I enjoyed Simon Pegg's performance as Scotty however - and John Cho was also good in his brief scenes as Sulu. Playing the primary female role in the movie, Zoe Saldana really impresses as well as Uhura, who plays a significant part in the overall scheme of development.

A minor niggle that I had about this film was the amount of lens-flares used - I didn't really see the point in having them included and it felt like it was just too much and distracted me more than once from what was going on in the film. That aside though I'll have to admit that the cinematography was pretty solid for the most part, with no scenes that felt weaker than the rest or out of place. I can't help but thinking that this film would have looked a lot better on the big screen than it did on the small screen with all the grand spectacle, but nonetheless I enjoyed what I got and the film on the whole was pretty impressive.

On its own merits, Star Trek is a decent film. The science in the movie doesn't make a lot of sense and there are a few things that require you to not pay too much attention to what's going on but on the whole the film is pretty enjoyable - fast paced, action packed and fun. It's worth checking out if you have the time, but don't expect it to be a classic.