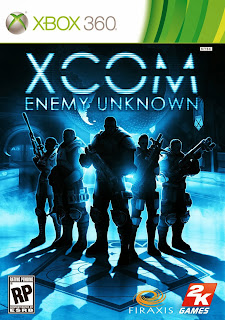 X-COM: Enemy Unknown is the first of  new 're-imagined' releases that has originally been adapted from the 1994 cult science fiction game UFO: Enemy Unknown, released last year and is also part of a reboot for the 1990 X-COM series. Having not played any of the XCOM games before this is my first experience with the franchise and I can certainly say that based on what I''ve seen so far, it's a success. From the makers of Civilization, high praise has been heaped upon this game since its release and as it turns out X-COM: Enemy Unknown does indeed prove itself worthy of that success, delivering the best strategy game that I've played on the Xbox 360 and providing a very awesome game. Whilst I've yet to complete the game having picked it up on Friday I can say that having spend most of yesterday and this morning playing on it, X-COM: Enemy Unknown is possibly one of the best games that I've played this year.

You play as a commander of XCOM, a group of soldiers put together at the request of the Council of Nations following an alien invasion in the near future. XCOM is by all accounts the most elite military and scientific organisation in human history - however, they're up against an enemy whose technology and scientific advancements are well beyond that of humanity. Across the globe, various countries will find themselves under attack by aliens and it's your task to stop them. Rewards will be given depending on which country you choose to aid, but this is at a cost - if multiple nations come under attack then panic will increase in the nation that you are unable to help. And to make matters worse, if a panic level reaches a certain level, then that nation will withdraw itself thus unabling you to gain its rescources. The game then, requires a certain level of strategic thinking in order to pull it off - and it's certainly an entirely different beast from straight up shooters like Call of Duty and Battlefield. In X-COM: Enemy Unknown, all decisions will have consequences - and it's up to you to deal with risks that each mission brings. 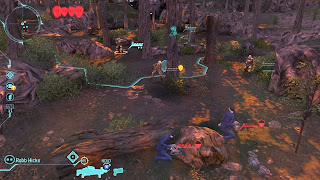 You're given a certain amount of customisable soldiers to accomplish various missions - which vary between cleansing an area of aliens or saving hostages - and you can change the way they look, their names and more. I named my soldiers after my friends in the hope that this would strive me to take more care of them so they wouldn't be killed off so easily - as turn based strategy games aren't my strongest suite - however this wasn't the case as I quickly watched soldiers bearing my friends names killed off one by one. I then reverted to  naming new recruits after fictional characters, and managed to get some great satisfaction off the fact that the likes of John Sheppard, Malcolm Reynolds and more were fighting alongside each other in the defence of humanity. At the moment the list of friends/fictional characters is currently a roughly even split, but as more characters get killed off each mission that could potentially swing either way. This fun addition makes missions a little extra awesome.

The gameplay is decent as well. Missions are often varied and whilst I have not encountered any playable space battles so far (merely simulated) I would have liked control over ships shooting the UFOs down as well. It's a minor problem that's more of a personal issue - as this would have been more fun than hoping that your Interceptor will be able to shoot down a UFO. On the ground, the gameplay is similiar to cover-based third person shooters such as Gears of War, only in RPG style. The turn based element works well and the enemy that you're up against actually remains hidden from view until you reveal the fog of war near their location, so you have to estimate where they will be and keep your soldiers in cover at all times. Even in cover it's not a guarantee that your soldiers will make it out alive - with a certain percentage accuracy - I.E., the closer you are to a 100%, the more likely you are to hit your target - put into play. The characters can be outfitted with special weapons after research (or completion of missions) allowing you the choice of what you want to upgrade - new technology, weapons or other elements designed to keep your troops alive on the battlefield. The end result is a lot of fun, with a thrilling game that should appeal to newcomers of the franchise like myself. I haven't encountered any XCOM stuff before but Enemy Unknown has certainly got me interested in more of what it has to offer - and I'm looking forward to seeing if any future games XCOM games hit because I will certainly be picking them up.

The visuals are pretty good for a console-based strategy game. Most RPG games that I've played on the console have been pretty poor but XCOM seems to work brilliantly. It's engrossing and captivating and I could easily (and have already) spend several hours a day on this game. So therefore based on what I've seen so far I'm going to recommend this game, however my opinion on it could change - and if it does, I'll update this review or post a new one - as I progress further forward. So as for now X-COM: Enemy Unknown is a pretty good game and it comes with a strong recommendation. The only problems may be a steep learning curve and a smaller scale than other RPG games like Dawn of War  and Halo Wars - but aside from that, XCOM: Enemy Unknown is a solid game and worth picking up if you're a Xbox gamer who still has their 360 console. I can imagine this would be greate on a computer as well.