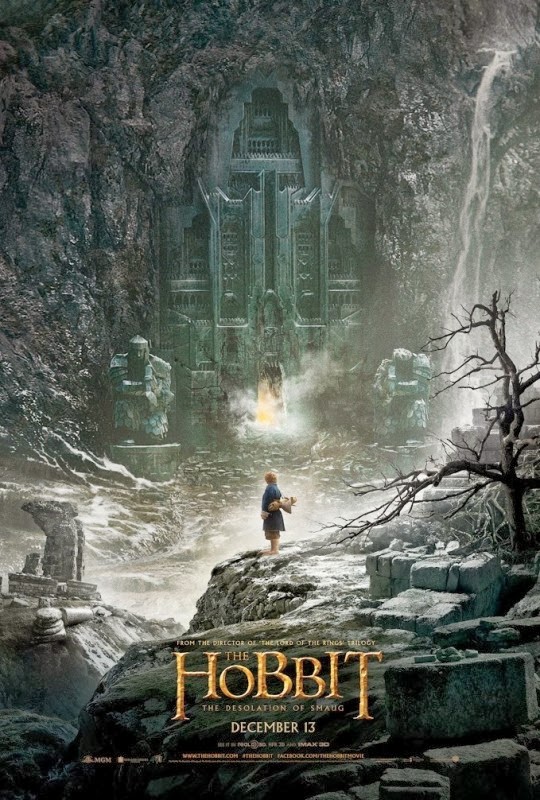 So, I saw Desolation of Smaug yesterday and ended up really enjoying it. Whilst it's not the best film I've seen this year it's nonetheless a pretty good one, better than An Unexpected Journey but not perfect. Whilst Desolation of Smaug isn't really needed in the overall scheme of things when you can probably consider that the whole adaption of The Hobbit could have been scaled down into one movie, it was a great thing to be back in the world of Lord of the Rings once more as the film itself develops overtime. It certainly picks up speed from the first film, with no singing (presumably that's saved for the extended edition) and provides several awesome action sequences.

Of course, most people will be wanting to know about Smaug himself. Voiced by Benedict Cumberbatch (who also does The Necromancer), Desolation of Smaug captures possibly one of the best dragons on screen in the history of cinema. It's an awe inspiring and and gets pulled off pretty well. Smaug is easily the best of the new additions to the Trilogy, but that doesn't mean that the others aren't interesting as well. Orlando Bloom's return as Legolas was a surprise and Evangaline Lily brought a strong performance to the film in the role of entirely newcomer Tauriel. Human-wise, the new addition is Luke Evan's Bard the Bowman, with a few brief appearances by the ever-brilliant Stephen Fry. And that's not to mention the recurring cast, Freeman and McKellen among the highlights, with Freeman easily stealing the show and proving just how well he can act, leaving me eagerly awaiting the return of Sherlock Season 3. McKellen likewise is equally impressive as Gandalf, whilst the dwarves are for the most part pretty strong and there is an attempt to flesh out the characters beyond Armitage's Thorin which was nice to see as before this movie they were all pretty interchangeable.

There's a lot of action in this film.The Spider sequences are pretty cool and the end finale with the Dragon was pulled off very well and I think the barrel-riding scene is probably one of the highlights of the film for me. It will inevitably get made into a theme-park version at some point but overall it was pretty entertaining and the rest of the audience in my cinema seemed to enjoy it as well as it allows for one of the more humourous scenes of the film.

Does the confrontation with Smaug rival the Riddles in the Dark scene from An Unexpected Journey? Probably not at this point, with Gollum's scene being easily the highlight of the two parts so far. But it is nonetheless pretty damn impressive, with the sheer spectacle of Smaug being pulled off incredibly well indeed. However - there is still the third film to go and I'm hoping for a similarly memorable sequence then.

Also, I ended up watching Desolation of Smaug in 3D and can tell you right now that it's not worth the admission cost. It's done more for depth than pop out moments and whilst some 3D shots help get the full scope of Smaug in question it's better off saving your money and going to see it in 2D. So far, the only films that have worked well in 3D are Gravity and Avatar that I've seen, and Avatar doesn't really count because the storyline was pretty pathetic.

Tolkien purists will no doubt find plenty to complain about in The Desolation of Smaug. The several CGI action scenes do get boring after a while and the 3D overall is weak and the length of the film is unnecessary, but overall - I enjoyed it and will be going to see it again on Wednesday with friends as opposed to family. Something that I enjoyed better than Iron Man 3 and The Wolverine but not quite on the same level as Man of Steel or Gravity, I'm now going to have to suffer the year-long wait for No. 3 and am hoping that Jackson can pull of the spectacle and awesomeness that The Return of the King gave us. Looking forward to it.