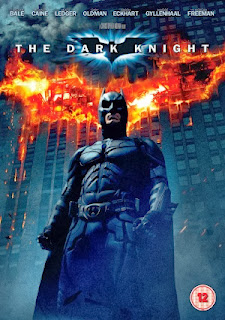 The Dark Knight is quite simply, the best superhero film ever made. In fact, it's not just the best superhero film ever made, it might just be one of the best films that I have ever seen - and certainly is something that I can always rewatch over and over again even if it may be a bit longer than it needed to be. Taking place following Batman Begins, Bruce Wayne has been relocated into Gotham City following the destruction of his Manor by the League of Assassins in the first film, where he finds himself on the verge of bringing down the mob once and for all. Whilst Batman Begins was a film that in its majority took place in the night, aside from a few notable set-pieces, The Dark Knight takes place in the day, an area where Batman isn't as intimidating and this is where Heath Ledger's Joker makes himself known, with an intent to bring chaos to Gotham City. It's arguably the villains of The Dark Knight that really steal the show here - whilst Batman Begins was about its hero the sequel places the spotlight on Ledger and Aaron Eckhart, who plays District Attonery Harvey Dent. Both actors pull of incredible performances and whilst The Joker may gain all the attention, Eckhart delivers a powerful performance of Dent, making his fall from Gotham's "White Knight" to Two-Face being pulled off incredibly well. 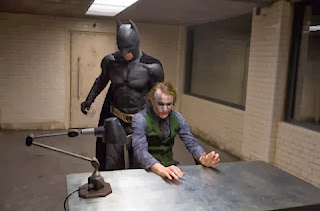 The film opens in the day, featuring the Joker and his mask-wearing gang robbing a mob bank. This is a great way to kickstart the scene and when supported by Hans Zimmer and James Newton Howard's incredible score makes the film kickstart strongly and it gets even better from here. Not even The Avengers can come close to the scale of awesomeness that The Dark Knight delivers and it rises above everything that we've seen from superhero films before setting the bar for all that follows. The film's many set pieces are pulled of incredibly well indeed, and whilst one can argue that there are perhaps more than necessary - it nonetheless makes the film a strong watch that can hold its own without knowledge of the previous films. More often than not I've told people looking to watch this trilogy that The Dark Knight is the superior installment of the trilogy, and with a basic knowledge of Batman this should be watched first. It's dark, gritty and just breathtaking. Nolan manages to make a superhero film unpredictable and whilst the incredible acting from the cast always helps him and Goyer have delivered a really strong film, with Nolan using the movie to explore not only Bruce Wayne as a character in further depth but also the villains are fleshed out a lot more than one would expect from your average flick as well. By and large, this is because The Dark Knight is not your average flick. It's an epic, and should not be missed under any circumstances whatsoever, whether you liked Batman Begins or not.

The film's biggest weakness it that it moves on for far too long. It comes off as overly bloated at times and you get the feeling that the two threads involving the Joker and Harvey Dent could have been split into two separate movies - but ultimately, everything provided in this film is brilliant, benefiting from a strong cast with the likes of Michael Caine (who delivers a particularly strong performance as Alfred), Morgan Freeman, Gary Oldman and more, you wouldn't expect anything less of a film with actors of this level of talent and the end result was far from a disappointment. The film never gets old even when I'm watching it for the third time now - I could quite happy rewatch it by the end of the week and not feel bored halfway through. It's just a masterpiece, and easily 2008's best film, with a compelling storyline and some strong action scenes to boot.

There are several influences from the comics that The Dark Knight draws upon for storytelling inspiration. Whilst not outright adaptions the film draws influence from Jeph Loeb's phenomenal The Long Halloween, depicting Harvey Dent's fall from grace - even without the inclusion of all of Batman's Rogues Gallery that were present in that film. There's a nod to Brubaker's The Man Who Laughs, when The Joker announces who he's going to kill before killing them, and all these touches are pulled off well and it's good to see that the writers are adapting and being influenced by source material from the comics - which is something that DC seem to do a lot more than the folks over at Marvel where movies like The Avengers and TV Shows like Agents of SHIELD don't appear to be adapted from anything whereas all of The Dark Knight Trilogy and Arrow draws heavily from the comics. Even Green Lantern does, although that movie was not as strong as the rest. One thing's for sure though, The Dark Knight proves just how well source material can be used and there's a reason why this is a genre defining film.

This is a film where you really should believe the hype. If you're one of the few people who are yet to see this movie then get a copy on DVD or Netflix and check it out. Trust me, you won't regret it. Despite the fact that it may be overlong, I'm happy to award The Dark Knight five stars out of five. It's just that good.