I review 47 Ronin, a Japanese Legend that has received the Hollywood movie treatment, starring Keanu Reeves. 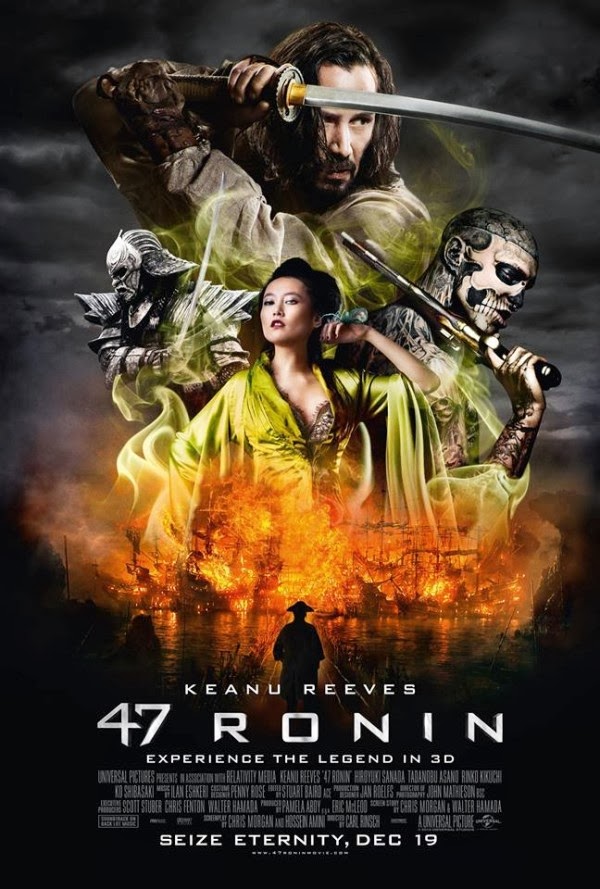 I went into this film with pretty low expectations. It's the second film that I've seen this year behind American Hustle, which I very much enjoyed (and still also need to write a review for at some point) and whilst it wasn't as brilliant as the latter it was an entertaining film that's far from the worst film I've ever seen on the big screen. I've even encountered Keanau Reeves before - although I am one of the few people not to see The Matrix or its sequels, but in Constantine - before I read any of the comics. I enjoyed the movie when I saw it but Reeves was horribly cast and I would have liked a more London-set film like where the character was based in the first Volume of Hellblazer - which along with Red Right Hand and the current Constantine series over at DC Comics rather than Vertigo has been my only experience with these characters so far. But this review isn't about Constantine - it's about 47 Ronin, a movie based on the Japanese Legend that I hadn't actually encountered before this movie as my knowledge of all things Japanese is actually pretty slim. However, it's quite ovbious to see what the movie's biggest problem here is even without knowledge of the legend - the choice to cast Keanu Reeves in the lead role.

The film opens in 18th Century Japan, where Lord Asono (Min Tanaka) is manipulated into attacking his rival Kira (Tadanobu Asono), and as a result is forced to commit suicide. In order to reclaim the honour of their master and rescue Asono's daughter (Ko Shibasaki) from being married to Kira, the Samurai loyal to Lord Asono are gathered together by Vassal Oishi (Hiroyuki Sanada). Also called by Oishi is the outcast Kai (Keanu Reeves), a halfbreed raised by demons who is an outcast from society. 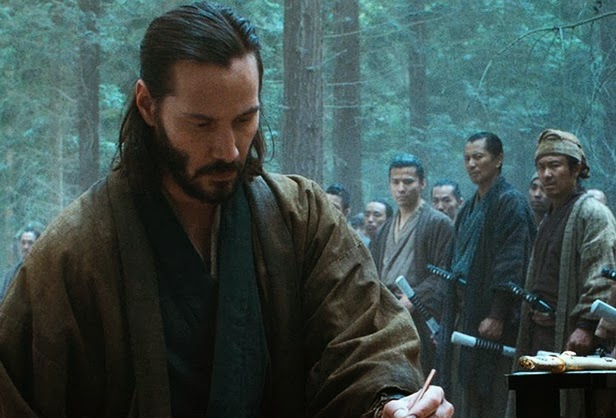 The latest adaption of 47 Ronin is the take that sends the legend into a fantasy tale. Whilst this may raise warning levels with purists, I was quite entertained by the addition of witches, dragons and more (despite problems that I'll explore below) but casting Keanu Reeves as Kai and devoting a significant portion of the movie on his character will probably turn off most purists altogether. The film itself is as a result flawed by the fact that it spends too much time focusing on Keanu Reeves, and as a result, the rest of the cast doesn't get as much time to develop. Beyond a couple the personalities of the 47 Ronin aren't really fleshed out and even then they aren't exactly memorable, but I certainly didn't expect the film to give nuanced depth to all of them without it being a lot longer than the just under two hours length that the film turned out to be. The characters are stereotypical as well - you could sum up pretty much all of them in one sentence and whilst in some cases it may work to the viewer's advantage such as when they're likable enough not to care it doesn't here. Not even Reeves is charismatic and strong enough to be make me really want to get behind him and root for him, particularly when the bad guys are just as stereotypical. It doesn't help that they take the whole thing far too seriously, and there's not even any wisecracks or snorting moments to be found. As a result the film lacks the fun that it needs to be a romp, but I did still enjoy parts of it.

The action scenes are fun to watch and your enjoyment of the film on the whole will depend on how much you like them. The short length of the film helps as well so if you're a fantasy fan who's turned off by the prospect of watching three Hobbit movies that are two to three hours long each then 47 Ronin is a film for you. The cinematography is pretty good for the most part and the fantasy scenes are where the film shines - and Ilan Eshkeri's soundtrack is pretty solid as well, and whilst he may be no Hans Zimmer it's still pretty solid and helps add an interesting atmosphere to the film.

The main draw of the film is the spectacle that comes with the great, awe-inspiring landscapes and well crafted fight scenes that feel impressive on the big screen but are not as good as some that we may have seen before. The fantasy element doesn't feel as utilised as it could have been which is a real shame given the wealth of potential that the fantasy drama has to bring to the table. If you're going to make a Japanese Legend a fantasy movie then at least show the audience why you're doing so.

On the whole then, 47 Ronin is not one of the best films you'll see this year (or last year if you watched it at the tail end of 2013) but it can provide moments of entertaining fantasy fun despite not exploring the fantasy area enough. There's plenty of exposition-filled dialogue and the cast is mostly stereotypical with Keanu Reeves being one of the film's biggest problems - and whilst it can be fairly entertaining with some strong fight scenes and some awesome visuals, the film on the whole is pretty forgettable.