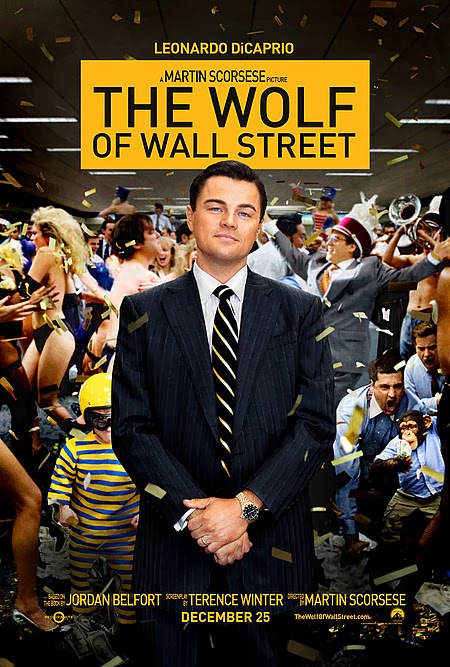 The problem with Best of the Year lists is that you can never watch all films that are released in 2013 in 2013, even when you leave it until early 2014, because there will always be something that you miss out. My Top 5 compromised of Gravity, Man of Steel, American Hustle, The Hobbit: Desolation of Smaug and Pacific Rim but upon the viewing of this 180-minute comedy entitled The Wolf of Wall Street, I knew that I immediately had to rethink my list. As far as I can remember it's the first film that I've seen directed by Martin Scorsese and based on just how good this film is I will certainly be checking out more of his work.

After hearing the announcements that this film won the Golden Globes for Best Actor in the form of Leonardo DiCaprio and the Best Comedy of the year, I decided to check it out at the cinema and it it certainly did not disappoint. There was plenty of hilarious moments that kept me entertained and easily helps you get through the three hour long running time which makes this film easily one of the longest of the year that I've seen, but it certainly doesn't feel like it mainly due to its strong, amusing narrative with some great comedy moments. This film actually feels like it deserves the Best Comedy of the Year Award, and whilst I've never been DiCaprio's biggest fan he was certainly on form here and much like Inception, the only other movie that I've been able to tolerate him, he impresses.

Much like the recently reviewed American Hustle, The Wolf of Wall Street utilities voice-overs to enhance the storyline. However, unlike the previously mentioned film, Martin Scorsese doesn't have narration from a variety of cast members - just DiCaprio, and it certainly pays off. It doesn't feel pointless. The film itself also, if I remember correctly - has the record for the most swear words used in a non-documentary film. This is another thing that works - and never at one point does it feel like there is too much swearing involved. It fits the tone of the movie and doesn't feel out of place at all.

The film balances on the edge of cliche in places, but it keeps having a fresh feeling right the way through. Based on the memoirs of Jordan Belfort, a bookmaker who spent the 1980's & '90s on pretty much an unlimited amount of money, allowing him to make use of the high life in the City. But it's not long before Belfort has to crave in as he finds the possibility of a long jail term thrust in his face - unless he rats on his fellow partners in order to minimize the sentence. Your mileage may vary depending on how well you can tolerate the unlikable lead character, but if you can get past that then you're in for a treat. The Wolf of Wall Street is truly great.

The best scenes in the film came during the conversations between Belfort and the uncorruptable FBI Agent Patrick Denham (Kyle Chandler) on Belfort's Yacht. That stood out as a real highlight for me and I loved the exchange between the two characters. The whole film is incredibly strong and I don't want to pick out anymore moments without fear of spoilers, but this is probably one of the greater ones there. It reminds me once again that I really need to watch more Scorsese films, Taxi Driver, Raging Bull, Goodfellas and more and that I really should have seen them by now. The comedy is great and there aren't any moments that feel uncomfortably awkward and neither was there any cringe-worthy dialogue. In short, The Wolf of Wall Street hits all the right notes and is a very strong contender for Best Film of the Year.

I loved this, and if you haven't seen it yet - go and watch it ASAP. Trust me - you won't regret it. Despite its 180 minute length, it's quite possibly one of the, if not the best films of 2013. It's DiCaprio at his best, and totally worthy of any award that it will ever receive.