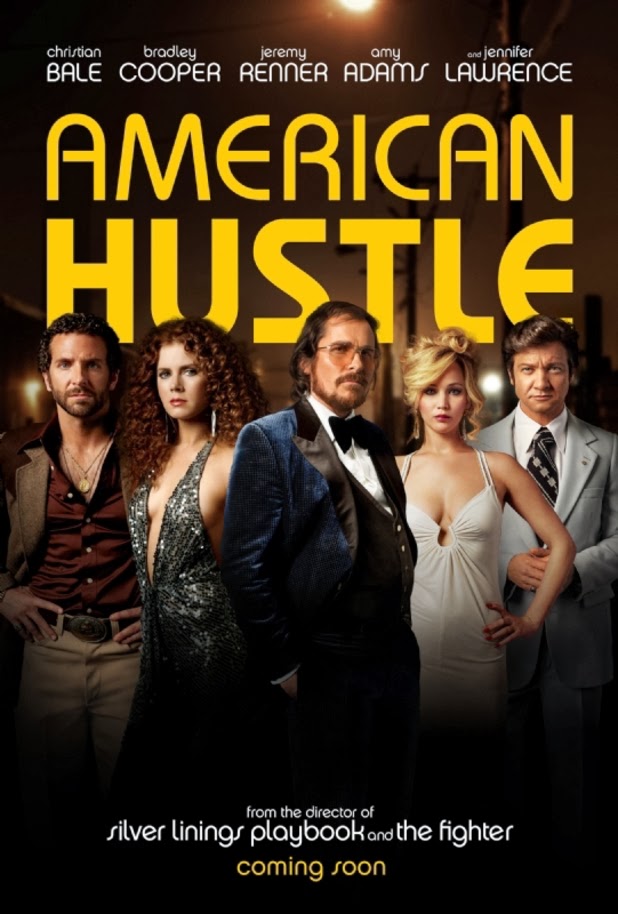 American Hustle was the first film that I saw at the cinema this year and it lived up to its already-high expectations as you can probably tell by the fact that I ranked it in my Top 5 films of 2013, along with Gravity, Man of Steel, Pacific Rim and The Hobbit: Desolation of Smaug. Whilst it wasn't usually the film that I'd go and see at the cinema as you can probably tell by the other titles on this list I was drawn in by the excellent cast and the high praise that this film was receiving. And I was not disappointed - American Hustle turned out to be a success and proves that you should never make Best Of... lists until the whole of the year has gone by because otherwise you will miss out exceptional gems like this.

The film introduces us to a con man, Irving Rosenfeld (Christian Bale), and his British partner, Sydney Prosser (Amy Adams) who are both forced to work with an FBI Agent Richie DiMaso (Bradley Cooper) when he uncovers their hustling scheme. As a result, DiMaso is responsible for pushing Rosenfeld and Prosser into a world ruled by the Mafia and Jeresy Powerbrokers and the plot really unfolds from there. It's a black comedy - loosely pulled from a true story as the opening announcement states - and there are several amusing moments. I didn't laugh out loud at any point in the film but on the whole I was still entranced by what American Hustle had to offer.

Unlike 47 Ronin, the last film that I reviewed, American Hustle doesn't separate bad guys and good guys with a line down the middle. (However, it's probably best not to compare a fantasy take on a Japanese Legend with a black comedy set in the late '70s), so don't go in expecting a clear line dividing the characters, and the ensemble cast are full of ambiguous moralities, including plenty of people who are out of their depth - I'm talking here of course about Rosenfeld and Prosser, when they are ordered to act as bait for mobsters and corrupt politicians by the FBI. Both Bale and Adams get voiceovers over the course of the film that help add to their characters and they never feel like they're being deliberately used for information dumping or exposition.The dialogue is smooth and there's rarely a cliched, cringe-worthy line in sight.

However, American Hustle isn't perfect. I would have preferred a longer running time because the story doesn't really pay off emotionally and you're never really invested in any of the characters that are brought to the table. However, despite this - the film itself is fun, entertaining and far from dull. Your mileage may vary depending on how much you care about the film having likable characters or not, but on the whole, it's still very good.

The cinematography for the most part is pretty good. The costumes and swanky hairstyles look great and you can tell that the production team has put a lot of effort into them. The soundtrack includes a variety of artists including Tom Jones and the Eletric Light Orchestra, preffering to use themed songs over original OSTs and it pays off - fitting the era and adding to the strength that the film provides.

Taking everything into account then, American Hustle is a good film. It's not perfect and neither was it 2013's Best Film - that award goes to Gravity - but it's still one of the better ones that you'll see from last year and I highly recommend it if you haven't seen it already.