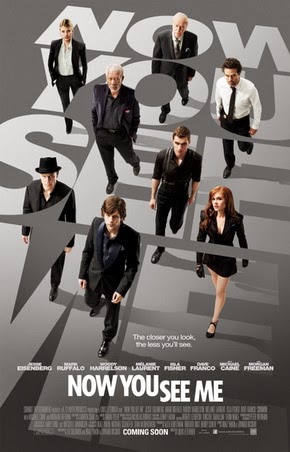 I love a good caper movie. One of my favourite movies of all time is the original Italian Job classic, so I'm totally down for anything that involves a good heist (or multiple good heists) which may also partly explain why Grand Theft Auto V was my favourite Game of 2013. Unfortunately, Now You See Me is something that doesn't quite reach the heights of the likes of Gravity, Man of Steel, The Wolf of Wall Street or American Hustle to come anywhere close to the top spots of the films that I elected my favourite of the year, and as far as I'm concerned, it's currently down there with the likes of The Wolverine and 47 Ronin as being the lower-quality films of the year for me. That doesn't necessarily mean that it's a bad film though - Now You See Me did have a great element of potential and is far from unwatchable - but I think the best words to describe this film are "wasted opportunity." It just doesn't deliver, and what initially could be fun suffers due to its unlikable and underdeveloped lead characters and underwhelming plot twists with several holes left open.

Four gifted street magicians, J. Daniel Atlas (Jesse Eisenberg), Henley Reeves (Isla Fisher), Jack Wilder (Dave Franco) and Merritt McKinney (Woody Harellson) are brought together by an benefactor who we later find out is Arthur Tressler (Michael Caine). However, following an act where they use a man to rob his own Bank - in France, of a large amount of money - the FBI are on the case with Dylan Rhodes (Mark Ruffalo), along with Interpol - who sent Alma Dray (Melanie Laurent) in order to arrest the Four Horsemen. However - how did the Four Horsemen pull off their act? Was it really magic, or just a series of misdirections? Rhodes and Dray end up going to Thaddeus Bradley (Freeman) an ex-magician who now exposes other magicians tricks in order to earn money.

The film has the potential to be great. The cast for the most part looks fantastic on paper - with the likes of Morgan Freeman and Michael Caine almost making you think this film is directed by Christopher Nolan due to his habit of using the same pair of actors in multiple films, most notably The Dark Knight Trilogy (Caine also crops up in Inception) - and Mark Ruffalo is great as usual. However, it's the Four Horsemen themselves who come across as too annoying, underdeveloped and unlikable - I found myself rooting for the people trying to catch them over the Horsemen themselves which is never a good sign when they're billed as the protagonists.

The opening ten minutes are probably the most entertaining of the entire film, but after a strong start it starts to get boggled down with a tangled, unconvincing plot that leaves so many holes open that although could be left for a sequel does still prove to be frustrating especially when the film doesn't do much when convincing you to stick around for more in the first place. Now You See Me also suffers from a plot twist that isn't as shocking as it should be, and is entirely underwhelming. The worst part of everything on offer here is that Now You See Me is full of wasted potential - it could have been so much better and maybe in the right hands it would have been - but what we get is a disappointing film that although may be fun in places, is a let down for the vast majority of its running time.

There are better 2013 films to watch than this - but it's not the worst to come out from this year.