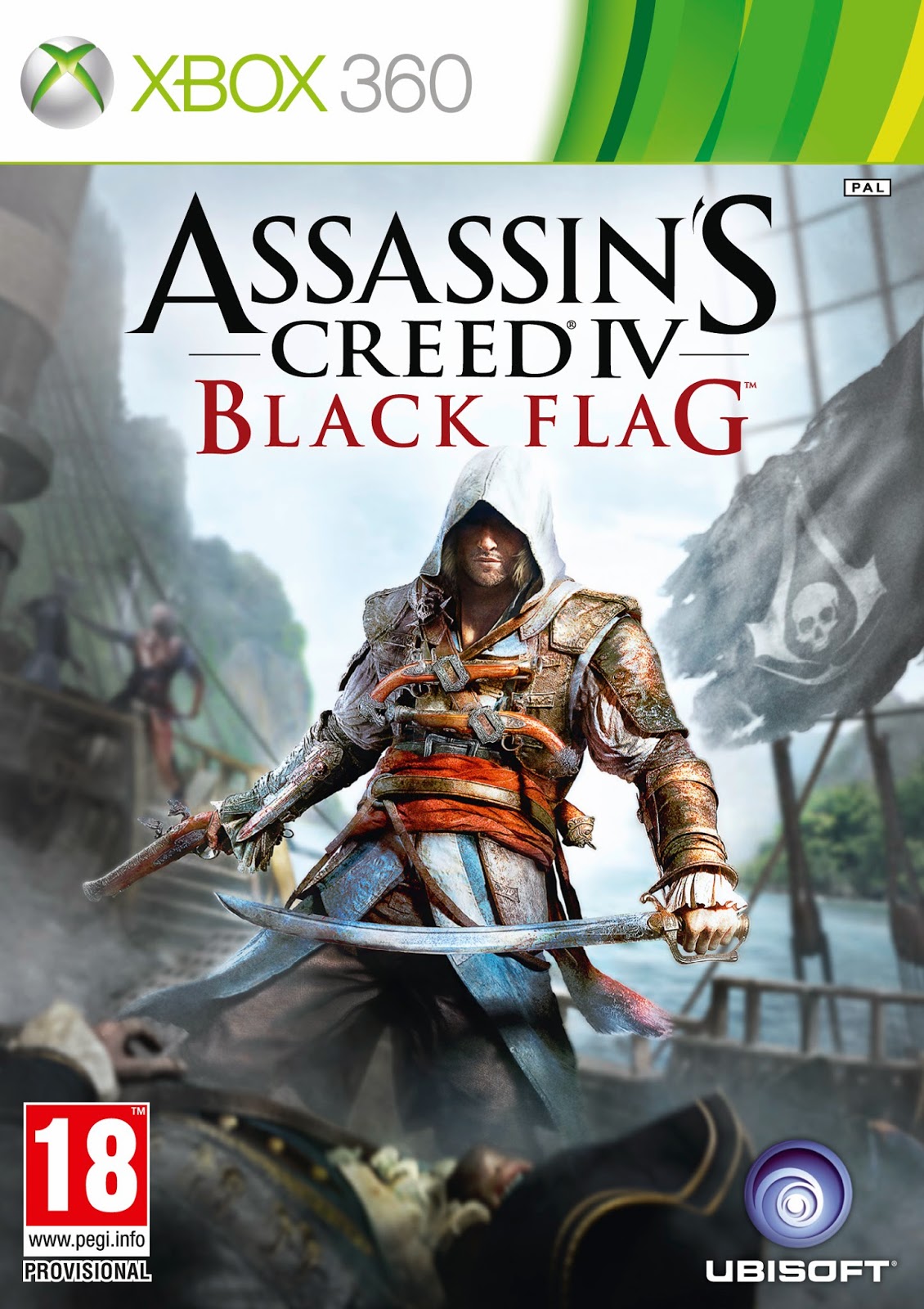 One of the biggest problems of Assassin's Creed III was the main character, Connor Kenway. Following on from Ezio Auditore whose charm and charisma had carried us through II, Brotherhood & Revelations, Connor felt too dull and boring to the point where even his Templar father, Haytham - was so awesome that in some places I was actually rooting for the Templars over the Assassins. To counterbalance that problem, one of the best new inventions of Assassin's Creed III was the ability to Captain your own ship and participate in several side missions and often use it in the main storyline itself. However, you never felt like you got as much free will on the sea as you did on the land and as a result most of the time during my completion of Assassin's Creed III was on dry land. I still don't think I've completed most of the side missions available in the sea. Thankfully though, Assassin's Creed IV: Black Flag addresses both problems, creating a rootable, nuanced protagonist in the form of Connor's grandfather, Edward Kenway - and the ability to explore the sea and the land in the biggest and best Assassin's Creed adventure yet.

If you were turned off the franchise with the last installment then Assassin's Creed IV: Black Flag corrects everything that went wrong. I've already mentioned two elements that affected my enjoyment of Assassin's Creed III but there are more to come. Whilst the last game took an age to fully get into the action with an overlong event focusing on Haytham before introducing us to Connor, Black Flag throws us strait into the thick of things. You're not yet a Pirate Captain, still a member of a crew, when you find yourself thrust into the middle of a battle fighting an enemy Assassin named Duncan Walpole. However, first - you must escape from your ship, and chase Walpole down before eventually killing him, only to discover that Walpole is turning over an important package in Havana for a large reward. However, there's just one problem - the giver of the reward has not seen Walpole's face, and would only identify him by his Assassin robes. As a result - the ever opportunistic Edward leaps at the chance to take the prize for his own, and steals the Assassin's robes and unwittingly finds himself drawn into the midst of a war between two secret organisations, the Assassins and the Templars. And of course, he ends up aggravating both.

Meanwhile, in the present, told entirely in first person, you must play a researcher for Abstergo Industries who remains nameless on their first day, thrust into a world where Abstergo Entertainment is focused on establishing a brand new game set on the adventures in the high seas, thanks to the animus using material 'donated' from the corpse of Desmond Miles. The out-of-animus storyline lacks its main narrator but is the first real time that I can actually say that I've truly got behind the present day setting, and found it very enjoyable to play. Whilst the first person is odd to get used to in a predominantly third person game, we get an interesting narrative switch that allows the two different storylines to feel compelling and engaging, even if it still suffers from the problems of being not as interesting as the historical advenutre that Edward Kenway is having. Who needs the always punch-able Sean Hastings and an even Jerkier John the IT Guy when you have the likes of James Kidd, Edward Teach and Charles Vane at your disposal? Despite an improvement this time round, I could quite happily do without the present day setting at all as it has an annoying habit of pulling you out of the action when things get really interesting.

The visuals of Black Flag look amazing, even on the Xbox 360. I've yet to play it on either an Xbox One or an PS4 but if the graphics are an improvement on what we've seen here I will be utterly blown away. They're just jaw dropping, with some incredible detail put into the scenery, the ships and the characters themselves. It feels just as good as the Assassin's Creed franchise is going to get in terms of design - and it's easily one of the strongest parts of an excellent game. Several times I was just blown away by the sheer visual elements of what the game had to offer when it was hauling us through the rich era of piracy, and the open world experience that those who have encountered the series with before will find that you could just as easily spend a whole session just exploring the world looking for new surroundings as you could advancing the plot, which is a thing of awesomeness in its own. It's worth picking up the game for the graphics alone though, let me tell you that, and if for some reason you're not already interested after the word "Pirates" then I don't know what will keep you hooked.

The plot itself utilizes a vast amount of historical characters at your disposal. You get characters who I've mentioned above in all their glory - James Kidd, Edward Teach and Charles Vane being the three main characters that help Edward along his journey. They're all different, nuanced and flawed as well - James has his secrets to hide whilst Edward Teach is as fiery and indomitable as one might suggest from Blackbeard himself. Charles Vane is an interesting character as well - and there's also the likes of Benjamin Hornigold and more to content with. However, Black Flag handles them all very well. I was instantly rooting for the side of Edward over the mixture of English, Spanish and Portuguese enemies, and when the film deals with the deaths of several major characters they had the emotional depth that previous installments lacked. I haven't yet reached the ending (although I am certainly in the latter stages of the game) as I write this review and I will update my thoughts if the experience changes, but this game was an utterly fulfilling experience and I was engrossed right from the start.

It's not perfect though, and there are some problems. The fighting mechanics are annoying and cumbersome but the game has improved the stealth advantage of things even more with whistling when in hiding spots to lure guards towards you becoming even more crucial - however, I think that they could have improved on the combat system because it is still frustrating in times. I also would have liked a bit more variety amongst the ships that Edward faced at sea, we're limited to British and Spanish enemies for the vast majority of the game, with the ships divided into classes (Gunboat, Schooner, Brig, Frigate and Manowar) that lack variety. Once you've fought one from each of the class there's no new experience when it comes to fighting at sea, and towards the end of the game the naval combat can feel repetitive. However, the ability to heavily customize your own ship, the Jackdaw, is good to watch as the upgrades are actually more affordable than the ones on Assassin's Creed III. They're also more important - I rarely upgraded my ship and managed to complete the game in the previous game but here I found that I had to upgrade it pretty constantly unless I found myself frustrated when facing down Frigates and Manowar class ships.

In conclusion then, Assassin's Creed IV: Black Flag is the best game in the franchise yet. It corrects almost everything that fans may not have enjoyed in the previous installments and provides a new and fresh experience, bringing life back to a series that many may have feared was losing its way. It's the freshest installment yet in the franchise and I have loved every second of it. One of my favourite 2013 games - Black Flag is a must buy for any fans of pirates, previous entries in the series or just those who love open world adventure games. Highly recommended.