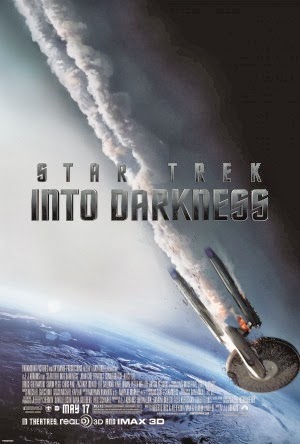 I'm going to get this out of the way here and now - I'm not a long term Star Trek fan. I've never seen anything remotely Star Trek related before the first JJ Abrams film in 2009 aired on TV a few nights before Christmas and I decided to check it out, and it's something that I really enjoyed. So when I could watch Star Trek Into Darkness I jumped at the earliest opportunity, and ended up really enjoying it. There are of course a few problems that prevent it from being a perfect sequel, but in my opinion, Into Darkness is a lot better than the first movie which still was pretty good - mainly due to the excellent cast that it has on offer. Chris Pine excels in the role of James T. Kirk bring some great charisma to the team and is very underrated in his role as Kirk as my opinion and should deserve more praise - whilst Quinto does do a good portrayal of Mr. Spock. Karl Urban is always awesome as Bones - being the notable highlight on the USS Enterprise aside from Spock and Kirk, I'm starting to warm more to Simon Pegg in his role as Scotty in this film and I enjoyed his character arc even though his storyline is a little predictable. But then again, Star Trek Into Darkness is essentially a Summer action movie blockbuster, so like Iron Man Three and Man of Steel which came out in the same year, it's always going to be predictable.

There are two main newcomers to this film that didn't show up in the past. Benedict Cumberbatch's role as the former Starfleet Agent turned rogue John Harrison presents a more than formidable threat to the Star Trek crew, and like always from Cumberbatch, he delivers a strong performance as the enigmatic villain on a one man war against humanity. He's fun to watch as Harrison and although his secret identity will be obvious to pretty much anybody who's even remotely familiar with the Star Trek franchise rendering the secret pretty much an entire waste of time - but on the whole he serves as a much better villain than the last movie's Eric Bana, who suffered mainly due to lack of screentime and poorly written lines. The other new addition is the Admiral's Daughter, Carol Marcus, played by Alice Eve, who doesn't get as much to do as Cumberbatch but still plays a decent role in an attempt to add some more female characters, but does suffer from a lack of real development. Out of all of the cast she's probably the weakest addition, but still puts in a fairly strong performance. However, something else that bugged me was the stereotypical treatment of the two female characters - both Eve and Saldana's roles are undermined by what they are given with in the script. The key examples being both Eve taking off her clothes in front of Kirk and not doing much else in the movie, and Saldana (Uhura) interrupting a crucial mission to nag her boyfriend Mr. Spock.

Like the 2009 movie, I think the best word that can be used to describe Star Trek Into Darkness is fun. It's an action packed sci-fi blockbuster that makes it the perfect film to watch on the big screen if you're in the mood for fun, a decent script and some good cast having a great time. There's no real weak spot in the whole casting this time around and the end result really enhances the film. Yes it's not perfect, but it's still a damn sight better than a few other films that came out in 2013 (I'm looking at you 47 Ronin and The Wolverine) and matches Iron Man Three in terms of action packed awesomeness.

If the script made sense, Star Trek Into Darkness could have well ended up being one of my favourite films of 2013, but sadly it falls just short of the Top half category mainly due to the consistent problems that the film boasts. The first problem here is the use of teleportation, or transporters. Early on in the film, the Enterprise is hiding underwater on a planet that hasn't yet discovered the Wheel during an exploration mission. They have transporters and don't want to risk the discovery of their ship so why don't they just use transporters to get down to the planet where the ship would be in no danger of being discovered?

A development in the plot that was also wasted was the choice to demote Kirk from the ship in a move that would have made more effect had he not won it back seconds later. The film really seems to struggle with sticking to something without reversing it (Scotty coming back after he quit on a principal was although a nice touch, entirely predictable) and even death is cheated at the end of the film by Kirk which totally loses the emotional impact that you had from killing off your main character. This was the real problem that I had with the film, which was a shame because not only did you know that Kirk was going to come back at some point because well, it's Kirk, but it felt like a real copout in the way that they pulled it off.

So yes, whilst it would have been nice if we had a smart Star Trek movie for a change, whilst Star Trek Into Darkness lacks in that element it more than makes up for it in its fun filled action. If you don't go in expecting much (I went in fully prepared to hate it after seeing several negative reviews (and the always amusing Honest Trailer on Youtube) online) you'll end up really enjoying it. So on the whole, Into Darkness is not perfect, but it more than makes up for it if you go just expecting a fun filled action extravaganza.